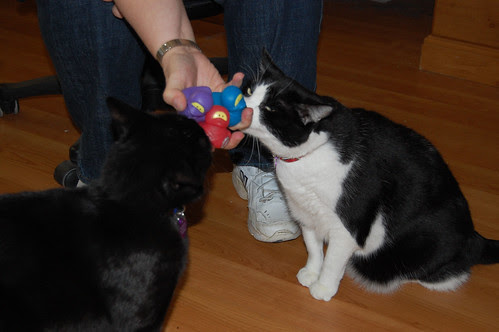 Oooh, Mom has a bunch of ducks like that. They are SCARY! Santa Duck especially. When Mom squeezes him, he (gasp) puffs air at us! Be careful, Max!

Padre, Panda Bear, Meerkat, and Cookie and Caramel (the fosters)

Ninja Ducks, huh? Since Buddah really likes them, I bet they will keep him out of your fur, even if they don't disappear in the night.

We have never heard of ninja ducks but they've got to be good if they keep Buddah occupied.

If you are a cat lover or a dog lover or any type of animal lover, you MUST come check out this site. It www.freestuff4animals.com

What it is, is a website where pet owners put stuff that they don need or want anymore on there. Then another pet owner could see it and who ever needs it can get it for FREE. Or, you guys can do a trade. So if you sick and tired of paying for things, please go to www.freestuff4animals.com Its only $5.95 a year. Plus a dollar of that goes to the aspca!

So please, help the animals and help other animal owners. Thank You!

Those ninja ducks look very cool ... I can see why Buddah went nuts over them. It was nice seeing the picture of Dusty, too. Hope your Mom has a good birthday, and I hope she gets more presents for you.
--Jasper

I'm am glad that you benefit from those ducks too Max!

Those are pretty ninja ducks. I'll bet Kirby would love to help Buddah hunt them!

Do you think they are mutant ninja ducks?

daisy has a point, there, max. maybe it's BEST that buddah has them if they're mutants;-)

Purrs and hugs,
The Kitty Krew

They do look like a lot of FUN to play with!!! Happy Birthday to your mom!

Hope the woman has fun playing with them.
All by herself.
Alone.

We agree Max... Annythin what keeps Buddah from botherin ya seems like a real good idea!