We're doing it backward this time

Usually, a book comes out in hardback first, then paperback, and the ebook comes either with the paperback or right after. But this time we're reversing the order, because there doesn't see to be a logical reason to hold the digital book back when it's ready to go. Not just because the print version is still in layout.

The paperback will come next, and after that the hardback. There won't be a lot of time between them, maybe a week or two. Now that we've got it done and uploaded and it's out of our hands, the Woman kinda wants to take a week or two off so she can go back to the gym and get in the swing of booby walk training.

So if you have a Kindle, or a device with a Kindle app, you can now get yourself the latest book in the Wick Chronicles series. We really had fun with this one and played with time travel more than we have in the other books.

Doods...there are wizards and elves, and a giant cat named Fluffy and a baby dragon named Jeff.

From the back of the book:

Drew knows there are two rules to using the time portals. One, be precise in thought. Two, never visit the future.

On his second practice run, a stray thought of wanting to see life 1000 years in the future lands him, along with Oz, the Emperor, Aisha, and Wick in 3416. San Francisco is in ruins. The Embarcadero is gone, the Bay Bridge is a broken skeleton, and the city has been overtaken by a dark wizard named Tobias. The only one who can destroy his power and his hold over the elfin citizens of Saint Francis is a clumsy, sword-wielding fifteen-year-old boy, the wizard Hagar and his fading magic, and the Trident—warriors of time long past who will stand beside the Lord of Prophecy.

Hagar knows their names and declares them as the Trident, prompting Will to agree to indulge Oz and Drew’s curiosity and stay long enough to understand the truth of how Hagar knows who they are. He could not foresee the horse-sized cat named Fluffy, the infant dragon named Jeff, or the truth about Tobias.

As he puts the pieces of the puzzle together, Will realizes the fight isn’t just to free the elves; it’s a battle Oz needs to see to the bitter end, and he’ll risk them all to get her there.

If you haven't read any of the Wick Chronicles, sit tight. In a few weeks the first book, The Emperor of San Francisco, is gonna go on major sale.

And just because, a picture of me: 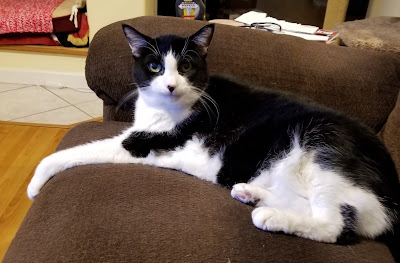 Wow, that all sounds pretty scary, though we like the idea of alarge cat! We hope the book does well in all formats...

Got the new book on my Kindle! Yaaaaay you! I am so excited that I will probably be up really late reading. Thanks, Mr. Awesome!