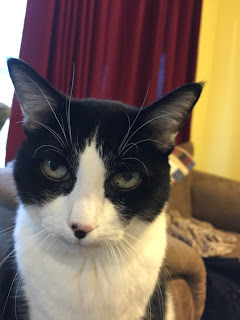 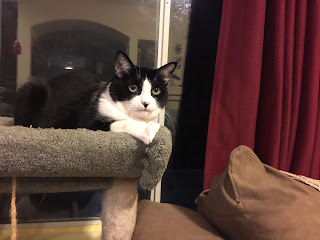 Great photos....even though the camera can be super annoying. How cool that you're getting to eat the steak.....Mom always keeps HER leftovers for herself.....

Those people and their cameras

Sounds like a good plan - hope ya get some steak.

That is ONE SERIOUS LOOK in that 1st picture Max! And best of luck at getting more steak.

Yes, you are good! You do have the beans figired out, Mr. Awesome. May the steaks be with you.

Human behavior is so strange!

We like how you think Max. Maybe you could get a job as spokes-cat for the National Beef Counsel or whatever they call themselves. Of course, the job would involve photo shoots of fabulous you being photographed chowing down on plenty of steak bits. You could probably get the people some sort of discount for any steak they buy & that way you could keep the steak bits coming. By the way, when you have steak & chick-hen together is it called a Cluck & Moo special?

I was gonna suggest you pee on that phone, but if she is giving you steak.. um.. you might not want to do that.

It's neat that you're being so cool about the Woman working out. Now that you'll be getting steak and other protein type treats much more often that's a reason not to care about the expletives deleted machines.

We all need to purrfect our feed me looks.

Iffen The Woman was more attentive to you, she would have remembered it was yer 14th Birfday Max!