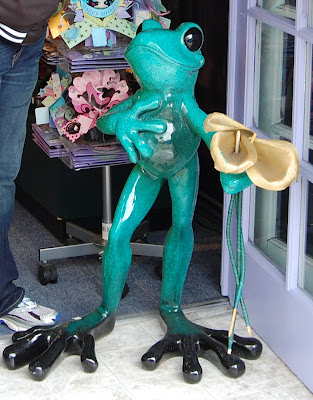 You deserve serious treats Max. We're not gonna send ya OURS, but ya deserve some.

The frog is way cool. Too bad. Imagine tipping him over and breaking it and how upset the people would be!

Did you at least get some treats?

What?! You got NOTHING! And they were at Fisherman's Wharf?! That is cruel!!!

We don't understand how your humans could have been so cruel, so oblivious to your needs and desires. Even our mom would have brought us back a treat. Right, Mom? Mom? Mom!

Pawrents! They has some nerve!! Make sure you show them the back!!
Nellie

The froggie would have been awesome! You could have stood him by the front door and dressed him up in seasonal outfits & stuff. The woman missed out on a true statement piece there if you ask us....but you didn't so well just add that she could have brought you back one or two little shrimps for cats sake!

Huh. He looks a bit... untasty to us! Maybe it was a good thing they didn't bring him home. But there were many other tasty treats they could have chosen.

You deserve good treats, Max, but I don't think that froggie in the picture would taste good.

I could mail you a trout or something Max. Really.

People who don't bring the litty a good present should lose a drop or two of their blood, I think.

Not bringing you back anything is not good! You probably wouldn't want the frog though. They are over-rated. We used to catch frogs and toads when we were young and foolish. They used to make our mouths go frothy.Ewwww!

My parents hardly ever bring me presents from their outings. Not fair!