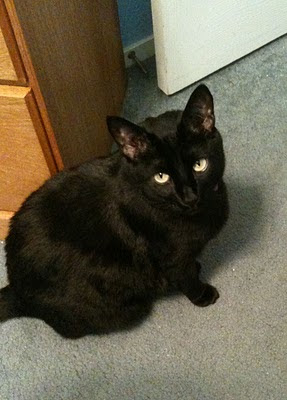 Your little brother is all grown up now, Max. Does it make you leaky eyed? :)

Awww remember when the little guy came to your house and he was all tiny & sneezy?? (Don't remember the part how you got pretty sick from him).
We hope he gets something for his birthday this year. It's a shame if a kitty gets overlooked on a special day.

Do they slow down at all? I keep hoping they will because Ichiro is tiring...

You were nice to him? Max, you are all heart! Happy birthday to Buddah.

I feel so bad for the little guy :(

Aww, we knew you loved him Max!

Come on, Max, you know you really care about the little stinker.

Oh dear!! We really hope Buddah gets some treats.We are 7 and we don't think we are old at all ;) heehee
Happy 7th Birthday Buddah!!!!

Thank you for your purrs for Mickey.
We miss Mickey, but know he is happy at the Bridge.
It just takes some getting used to right now.
Purrs Georgia & Tillie

Aw Max, how nice of yoo to wish da little ::cough:: dood a good morning...middle age ain't so bad and from what we hear from Zippy neither is old age.

Happy Birthday Buddah! May you get lots of extra special treats and goodies (that you DON'T have to share with Max, but you will because you're such a nice little bro).

From fellow "basement cats" at the Wilson Zoo
Simon & Kimber

holy crap. I can't believe that little booger is 6 already. It seems like just yesterday we bought your book all about him coming to your house.

It was nice of you to remember. He is a little sensitive I think so having your beans forget might make him cry and tears are never good. I live with the woman and the sticky boy so I know.

PS thanks for the heads up on the picture. mommy usually doesn't forget but she's been dropping the ball a lot lately...

Happy 6th Birthday Buddah! It is hard to believe that you are 6

Max, your little brofur sure is cute.
Kassey

That is a really sweet photo of Buddah. We hope that you are being nice to him for his birthday.

Max, you old softie, looking out for your little brother; highlighting *his* special day. He sure has grown, hasn't he? One day he's just a small speck of black fur; the next, he's a black handsome full-grown kitty. Great looking image of him. I hope you both got some extra treats and attention tonight.

You need to inform your humans it is against the rules to forget a cat's birthday! Buddah can SUE if they do not give him something special!

Don't worry Max. I turned 10 in December and it's been fine so far!

Yous is so nice to your little brother. Me is just as nice to mine. Do you whack him too?
Kisses Nellie

wow 6 years old. that means Miles will be 6 too. and I will be 7. crappity crap crap crap

Happy 6th Birfday Buddah, even if the Beins dont do annything for it...

Aw, Buddah! The Stupid Human wouldn't let me get on the computer last night so she made me miss your birthday!! Believe me, she WILL suffer for that.

I am sure your People made it nice for you. Don't listen to your brother--he's getting old and crotchety, MOL!!

Max: nice of you to honor your fellow kitty on your blog. I'll have to go over to Buddah's facebook page and wish a happy belated birthday.

My Pumpkin kitty was 10 when I got her. I don't have an exact birthdate -- sometime in June. I think she is close to 17 now.