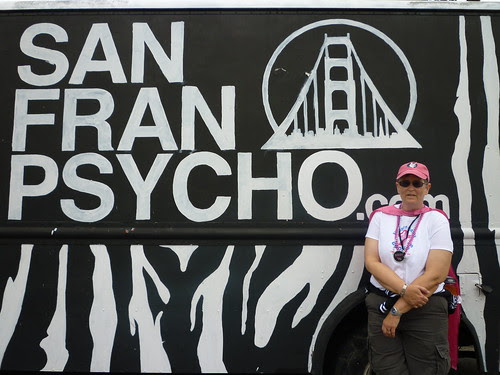 we's proud that the Woman walked fur boobies, but we're with you--it din't hafta take all THAT long, did it? ignoring a hungry cat for that length of time can be dangerous!! we're glad you survived!

We are very proud of your Mom and all the other cat moms out there. In honor of their three-day walk, I think I'll do a three-day nap.
--Jasper

We are very proud of your Mom, Max.In fact, so proud we think perhaps ours will join her next year.

Hooray for your mom, Max! She done a Good Thing!

We are proud of all your mums too. It makes our legs and feet ache just thinking about it.

It sounds like the Woman had quite a time! An sleepin outside? We dint know Beins did that...

Ya DID get fed though, right? And yay fer the cold air blowin thing!

Okay, so your human walked so much that she kind of forgot how to do regular walking for a couple of days afterwards, but she did a great job! You should be very proud of her.

P.S. I hope she doesn't ruin all her good work by not feeding you on time.

Sleeping outside can be fun if you are not too tired to enjoy it. We are proud of your mom and all the others for walking for the boobies!

Yeah, it is cool your mommy is proud of herself and it is cool our friends raised their beans right and they are saving the boobies, but doods, the kitties come first! Especially, the food part.

I'm glad your cold blowing thing is fixed! After this weekend, we'll be back to using the warm blowing thing. We did earler this week. It only got up to 58 degrees last Sunday!

Yoor mom did a really good thing fur da boobies and all da mom's should be proud. We bet it's fun watching her walk around now, like a pengwin or something! At least da cold air blowy thingy is working now.

I'm very proud of your mom for what she did.

Wow. Your Woman really did it Max. Huh. That's really a good thing that she did, but I hope she doesn't get any ideas about making you & Buddah walk along with her next time!

She looks like she held up pretty good too. Good job!

But, yeah, time to feed you and turn on your blowy thing.

I think the woman did a great job and you deserve some treats. Just because.

Your blowy thing is fixed?! Yeah! Was there something else about boobies?

Mao may start calling you Smarty Pants Max now... Is there a street sign the Woman missed?

Well done to the mom for doing the Boobies walk! And we like yoor noo pink ribbon! MOL!

we are very proud of your woman too. but it's awesome that the cold air blowy thingy is fixed!

Max, your Woman done good. Can you give her a cuddle for us, please?

DOOD - yer mom is awesome fer walking' fer 3 days! Our Mommakitty whines when she walks down da hill to get da mail!