I was digging around my files and found this, Max's first Christmas in 2001. He sat on that box as if he was sure it was his, but no matter how hard I tried, he would not look up when I tried to get pictures.
That avoidance would be an ongoing theme throughout his life. You want a picture of my face? NO. 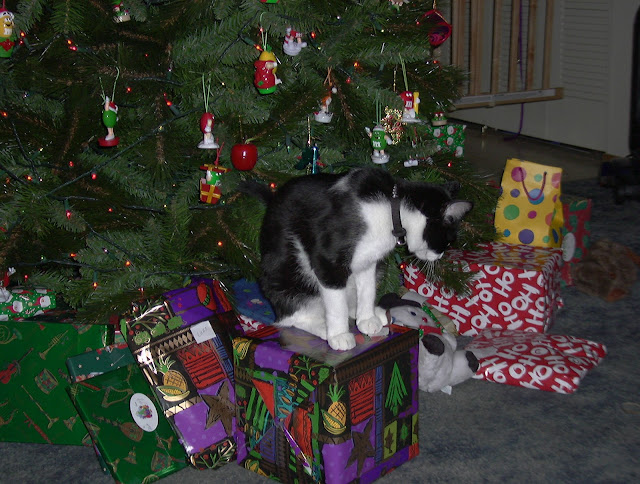 He was only 6 months old, long and sleek, and had--not even kidding--a roughly 5 foot vertical jump. We discovered just how high he could jump on a night when the power went out and we placed lit candles on the top of the entertainment center...and =boom= there was Max, on top, wanting to explore, terrifying us because floofy kittens and fire just don't mix.
It made games with the red dot a lot of fun because running that thing up the wall resulted in some spectacular capture attempts.
A year later, he was kinda fat. His vertical leap was less impressive by then.
Thank Bast.
Posted by Thumper at 12/19/2020 03:22:00 PM

Thats such a great photo, and I too suffered from post, adopt a human fat gain! I don't get presents, let alone boxes to sit on! Mrs H says I'm too busy chasing mice around the scullary to make full use of them and she just ends up tripping over them, MOL
Lots of purrs to you all, whereever you may be ♥️
ERin & Mrs H

That is a lovely photo of Max and his first Christmas. Eric also wouldn't look at the camera, but luckily Flynn was a proper little poser.
Happy Christmas to you both and your dear boys at the Bridge.

He was a right little stinker (and i mean that in the nice way). Precious, even while not cooperating.

What a boy he was. Thank you for the memory.

He was one handsome dood.

I want to make a contribution in honor of Max. Please let me know which charity Max would have chosen, and the address.