Today is a better day 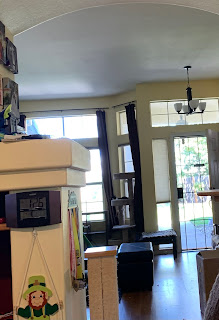 After yesterday and feeling like total krap because of those two absolute jerkwad units, we feel better. We're still not happy but we felt every bit of Mojo y'all wished and it helped a lot.

I think what helped the Woman the most was typing out the things we both needed to say. She's had an undercurrent of guilt, peppered with some doubt. Like, what if? What if the decision was made too soon? Why did it have to be that day? Why not one more?

The people had been saying out loud, "he's just not eating" but as we sat here and wrote, the truth bubbled up. It's not just that he wasn't eating. He was starving. And to let that go on would have been cruel.

If the meds he was on were going to work, they would have by then.

Everything settled with her after that. The doubt slipped away. So she thinks that while it hurt, the accusation was actually a blessing. It made her face things, and accept things, and while she's still sad, she's okay.

I think I'm okay, too. I keep looking for him, even though I know he's not here. I peed on the blanket he'd been on just before he left. And now I'm sleeping on his favorite cat tree, though not in his favorite spot. I probably would, but he liked the top level and it's just not safe for me to make that leap, and I know it.

For some reason it made the Woman happy to see me there. She and the Man almost took both cat trees out of the house on Thursday but just weren't ready, so now she's doubly glad they waited. I haven't used the other one yet, but they're leaving it in place to give me a chance to use it, too.

I'm making an effort to be not so grumpy because they really don't need that right now. I even got the Woman to laugh at 3 o'clock this morning. She woke up and got out of bed when she heard food calling to her, specifically cinnamon toast, and I jumped onto her lap and started eating it from the other side she was biting into.

The big surprise was that she didn't stop me.

BTW, cinnamon toast is awesome and if you haven't had any, get some. I have high hopes for a few more bites tonight.

I'm glad today is a bit better. Lots of good mojo and support to you and the Woman and the Man. Hanging out in Buddah's spot is sweet and cinnamon toast is amazing! Now I want some...

Mom has the same thoughts about Allie. Did she wait too long? Do it too soon? We do the best we can because we love them. We're glad you are spending time in Buddah's favorite spots. We know it must comfort you and your people.
The Florida Furkids

It seems like a good idea to keep something that smells of the cat that is gone...not sure about that blanket of his you peed on, though. That might have to have a wash. Purrs.

Toast is good.
Mom says "what if?" is a terrible thing that people can get beat up by. We are glad the Woman has found a little peace. Please know we are sending purrs

Oh, sweetheart, we all have doubts, woulda, coulda should a. It's natural.We aren't gods, we're just parents who love our babies, fur and no fur.We don't want to be without them. But we do what's best for them. Never second guess yourselves. You loved him. That's enough

Max, please tell your peeps that we’ve been there, and know the guilt, the fear, and the sadness. It’s very personal, and NO OTHER PERSON ON THE PLANET can really second guess; they weren’t there.
Hugs and purrs.

We all have doubts and wonder what we might have done differently.
Don’t go down that path. It’s heart wrenching....
Peace, Max
❤️❤️❤️

It's really hard Bro. The humans double and triple think every step when it comes to our health, their furbabies as mom says.You have the best of folks. We are so happy to hear you all are on the path to healing. It helps to vent and meow. We love you all. Buddah lives in our hearts and memories forever. Purrs

I lost my sweet little Cissy the same day you lost Buddha. I, too, have been second guessing my decision even though I know it was time. Perhaps Buddha and Cissy crossed the rainbow bridge together. She was a dainty bob-tailed tortie. They're waiting for us on the other side. You and yours have my sincere sympathy.

And yup! Cinnamon butter toast is the best! Purrs

I’m glad you are all feeling a little better. I know how bad self-doubt and guilt can eat at you.

Purrs to you all, peace is good...

I just love you guys. The whole fam damily. <3 That is all.

this reminds me of a poem from a long time ago and I want to share with you now , hope it is ok.

we love you all and hope and wish enough for you.

I am glad today is better. Our day has been sad. Our Deanna left us this morning without warning. I have been grieving with you for Buddah and for worry over you Max and my dear tortie girl left without a goodbye. May each day get better for you and your family and please don't leave us for a long time. We love you

We think having a toast buddy is just the best possible thing. We hope every day gets a little easier for all of you. You know we all love you.

So glad to hear today was a bit better. Grief is a bumpy ride. I'm glad Max shared the toast. Spitty, however, prefers his butter sans the toast part ;-)

So glad today was a little better. There will be other bumps in the road, expect them, grief is never easy and straightforward. But remember what a wonderful life Buddah had and how loved he was, and still is, and it will help you smile. Love and HUGS. X

I'm glad you're all feeling better... and now my human wants cinnamon toast.

I am glad you had a better day.
It is a sad fact of life that with social media come the trolls who just love to hurt others.
We all have our what ifs, it is only natural. With Flynn we knew beyond doubt it was time. He had fought back so many times, but in the end he had no strength left.
Eric was different. We had thought he was getting better but then he had a huge stroke and the vet said he had an extremely high risk of a saddle thrombus that night. We couldn't risk letting that happen. In our hearts we knew it was the right decision but that doesn't stop the doubts.

Any day with cinnamon toast is a better day. I hope today you get double!

There will always be someone who will second-guess whether you did the right thing at the right time, and it's someone who wasn't there and doesn't know all of the details.

Many hugs to you all, and lots of good cinnamon toast.

It's so hard when we can't just ask them what they want, or how bad they're hurting, or if they're ready to move on.

I knew Cinder was going downhill her last week with us but it wasn't until she couldn't walk steadily and started crying in pain that reality slapped me in the face that it was time to say goodbye. Now I'm looking at her sister Ember and starting to wonder the same thing. Is this her last week with us? Is she getting ready to move on? Or will she rally once again and have another string of really good days?

It's just so damn hard to know for sure. I'm glad you found peace in the hardest decision any pet parent has to make.

Every day is better but it never goes away. Sending much love from me and my furry friends. Love you

It takes some time to adjust to the loss of a cat. And other cats sometimes react oddly. I have made it a practice to let the other cats sniff the dead body of their companion. I mostly want them to understand that the companion is not just "missing".

I have no idea what concept cats have of "dead", but I think they have some. Many animals stay around dead herd members, but I'm not sure what predatory animals think. Elephants stay around their dead but they are herbivores. I don't know what carnivores think of "dead". It's part of their life to see it.

But I do know that cats care. When I laid Iza on the floor for Marley and Ayla to investigate, they sure didn't consider her food. Ayla backed away and sat for a while. Marley kept sniffing at Iza's nose (seeking a slight breath?)

When they seemed to have gotten some idea that Iza wasn't responding to them anymore and left, I removed her body from their existence. But I thought it was important that they see her not alive.

Max, we here at Mark's Mews hope you will adjust and go on. You have the rest of your life to live. Changes happen. Buddah lived his full life. The years of a cat vary. Some have many and some fewer.

HMMMM, Butter! Glad the humans are feeling a bit better about things.