"The State of Max: All this week, he's eaten reasonably well. There were a few days when he didn't want to come out of the closet or his bedroom, but food was welcomed and he seemed pleased to see me bring it...though I was not allowed to remain while he ate. That's fine. I think he feels safest eating in the closet because he can take his time and Buddah doesn't bother him.

Yesterday and today he's been wandering out to the kitchen and the living room, and has been taking his meals in the kitchen. He's napped in the living room, yelled at the window by the front door, and forced me to put down my computer for lap time. Definitely a couple of good days in a row.
Switching his meds from oral to the ear gel has been a major factor, I think. Lowering the dose was huge. Right now, he's just acting like a very old man, and I don't have that feeling of impending doom. Really, the only worry in the last few days has been a what-if worry if we needed to take him out of the house for any reason, because of the smoke from all the fires nearby.
As long as he eats--even if he wants to hide in the closet--and seems happy to see someone bring food to him, I'm calling it a win. And I'm not overly optimistic, BUT...he's having some good days and the days that aren't good aren't horrible. So. Just an old, old man right now. And that's amazing."

Yep, I'm definitely having some good days, and today I even graced her with my patented GLARE because she interrupted a nap by announcing she was going to the store to buy more cat food. Now, I didn't need the announcement because I had ordered her to do just that half an hour earlier, so I would have known where she was if I'd woken up and she was gone. I mean...really.
Oh, and apropos to nothing... Buddah barfed on the top of every single one of those bookcases the other day. It was AWESOME. 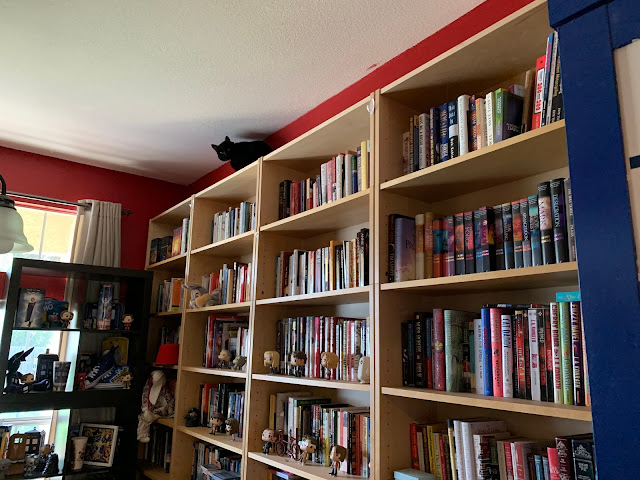 I am glad you are having god days, Max. Keep The Woman on her toes!

You had us worried there for a moment with that title, Max, but it was good news! It's good that your meds seem to be working better for you too. Long live the Psychokitty!

So glad you are having OK days. We will take those any day! And who says naps are bad? I love naps, the more the better. The life of eating and naps, sound like a purrfect life! Cheers Max! Smokey, Meeka, Fluffer, Wiggles, Gizmo, Nibbles, Buffy, and Smudge.

The Med change worked Max!
And all the TLC has enticed you to stay around for steak, love- in’s , lap sitting & freedom from Buddha it seems.
Plus you love you mum & dad.......And you know they Luvs You to the moon and back.

So happy you are having good days Max..just keep having many more of them.
Naps are the best, take lots of them. But remember to pay some attention to things you love, Tell them you love them, ok Max ?
❤️😻❤️😻❤️😻

Glad you've been having some good days.

We love you, Max!

Keep up the good work Max what would the woman do if you weren’t telling her how to do it? Oh and Buddha’s barf attack was kinda funny.
Chewie

Good to see you are still finding amusement with Buddha’s antics. You do like to keep everyone guessing about you....and you do a great job of it too, Max!

I'm so bummed I missed things from being sick!

Hurray fer your good days Max. And creds to Buddah for the horks!

What made Buddah barf? You, Mr. Awesome are such a great kitty and so complimentry!