Wow, I haven't blogged all year. I missed an entire month there, and then some. I'd blame it on old age and getting forgetful, but it would be mean to tell everyone that's what the Woman's issue is when it comes to helping me type. 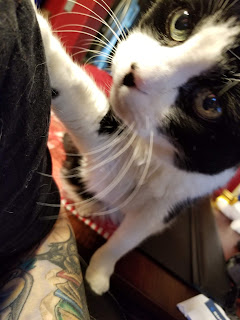 This is me, trying to get her to focus. I have to sit on the desk and tap her shoulder every now and then, otherwise she gets lost down the Reddit hole and eventually she starts drooling, her eyes glaze over, and she shows me really stupid things that involve dogs howling or jokes about all the Karens that annoy baristas at Starbucks.

But, lack of blogging aside, we have been working. We're eyeballs deep into The King of Saint Francis (title subject to change) and have started notes for what might wind up being a short story or novella.

'Course, I've said that about stuff before and what started as a novella exploded and turned into a novel. 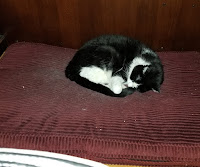 Also, when we're not working, I'm doing a lot of this.

Snoozing on the bed that's under the desk. It's been there for a couple of years but I only recently started napping there. And now I wish I'd given it a good try long ago, because it's quiet there and it's dark, and Buddah leaves me alone.

Yeah, it's kinda dirty because no one thinks to look there and I've gotten a lot of hair on it in the last couple of weeks, but I don't mind. It's all MY fur and not HIS fur, so it's cool.

I do feel kinda bad for Buddah, though. 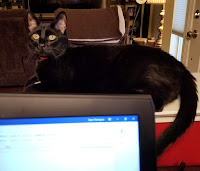 Y'all know how he likes high places and jumping to get there, right? Well, I'm noticing that more and more he's reluctant to make long leaps like he used to. He's looking for shortcuts to get up high more than he used to. Most of the time when he tries to jump he makes it, but a few times he's fallen short and is 7 kinds of embarrassed about it, and I totally get that so I won't make fun of him for it.

So the People are paying attention, so they can figure out how to add shortcuts to his favorite places that don't already have them. Most of them do, and they don't want to discourage him when he feels like jumping because it's probably better for him to stretch his abilities, but they're watching.

He's also bee snoopervising while we work. Normally that would annoy me, but he sits behind the monitor and blocks the Woman's view of the TV, and that's just freaking funny.
Posted by Max at 2/03/2019 11:25:00 AM

It makes a difference. In case you aren't already using it. My 16yo is up to two capsules a day and it makes a difference for her. She still won't do a lot of high jumping but she can still get where she needs to go and doesn't limp like she used to.

If it's your napping spot, Max, then you get to fur it up! I've noticed that Angel isn't quite as jump-happy as she once was, and am considering making a short step for her in a few places.

Getting old is no fun, Max. Just ask our mom!

AYLA here - Like Buddah, I'm the high jumper, but I've been finding the higher spots I like take some thinking and then a bit of butt-wiggling before I launch. I used ta just "levitate". I did even miss a jump a few weeks ago. And like you, I like out-of-the-way places ta nap. TBT knows where they are, but Iza can walk right past me and not realize I'm there. Which is sort of the point.

It is hard to keep our mum's on task. I can still get where I want to, mum is OK if I can't get to the top of the curio cabinets anymore!