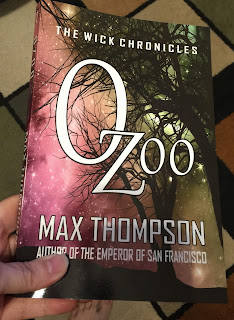 Ok, I now have 10 paperback copies of Ozoo (I can get more, that's just what I started with.) So if you were waiting for the paperback to get a pawtographed copy, you're in luck!

With all the rain we've had lately the Woman has stayed home quite a bit so we got a TON of work done on the 3rd book in The Wick Chronicles, and the vomit draft is pretty well sewn up...but now the discussion (between me, her, and her editor) is whether or not the entire series can shift from YA to General SciFi, because the tone is definitely changing.

The 4th book will definitely depart from YA, but we'd already planned for it to be the start of its own series, Wick After Dark. Yeah, it will not be for kids. The bulk of the outline is done, but the actual writing won't start until Book 3 is at least in formatting. So no asking to read it yet, Mrs. Undr, it's only think-stuff on virtual paper.

In other news, the Woman has raised enough money for St. Baldrick's that she has to record herself on video singing, so I'm being tortured while she tries to remember how to play the guitar (it's been a while.) The guitar part isn't bad; she just does chords and she's not horrible at it, just kinda slow on going from one to another because it doesn't feel natural anymore. What hurts is the singing. You people are going to be so tortured.
Posted by Max at 2/10/2017 05:05:00 PM

Max, we would LOVE to hear the negotiations between you and the editor!

We are so ready to red the Wick Chronicles