Oh yay! The Woman was sitting here at the desk (she’s normally in her chair but she broke her laptop thingy, which is fine with me because when she’s at her desk I can stretch out on top of it and dictate) counting county things, and said that one day next week is GO BUY THE TOYS day! I asked her how many toys we were getting this year and she said she doesn’t know the exact number, but y’all bought enough books to fill the back of the HHR at least once.

DOODS!!! You did that! Between January and late October you bought enough copies of my books to AT LEAST fill the back of the car! She thinks maybe twice…but if she and the Man can get a lot of good quality toys and there’s still money left, it will go to the shelter where they got Buddah.

She said she will take a picture of the toys in the back of the car so you guys can see how many kids you’re going to make smile this year.

I think this is her favorite time of year because she likes to go shopping for presents for people and kitties and dogs.

Right now the Man is out in the garage making things to sell in his Etsy shop and in the Art Gallery. Y’all bought some of his stuff this year, too, and a lot of it went to boobie charities, and I do like to save the boobies. (And :::coughcoughcough::: he has some stuff right no that would be spiffy holiday gifts…)

OH OH OH! (Channeling my inner Buddah here) last week the People went off somewhere, and the Grandma stayed with Buddah and me…you guys know how much I love having the Grandma, right? Well I got a huge surprise Monday night when she came back AND the Younger Human showed up with his SuperCool Other Half (SHE LIKES CATS!!!) They all went out to dinner and when they got home? THE YOUNGER HUMAN GAVE ME STEAK!!! 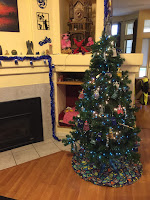 I mean, I’ve had the best couple of weeks. Lots of Grandma time (and she gives lots of treats), the People put up my Whovimas tree, and I got the Younger Human AND got to meet THE GIRL! Doods, you would so totally like her. I wasn’t even afraid of her, it was like I knew right off she was pretty cool. And then to top it off, the Man wondered if I was getting cold at night (because I’ve been waking them up at 4:15 and not shutting up) so even though the Woman sweats a lot, they turned the heat up at night! SEVENTY-SIX DEGREES, YO!

Such awesome news all around, Max! BTW, I didn't know your human has an HHR - so does my human's boyfriend! His is a black panel HHR. He wanted a turbo with panels but couldn't find one near him.

You & your Humans are the bestest Max. Hope they have lots of fun doing all that toy shopping. Our peeps made sure to buy some kool things for teens this year. They thought that most people donate toys just for the little kids and they wanted to make sure some older kids got a great present this year. Can't wait to see the car filled up with pressies. You have been having a feakin' great time lately Max. lots of Grandma time and sweeties that love cats and tons of steak. It's like Chrisymouse came early for you this year. Hope the warm heats continue & make sure to wake mom up extra early to show her how much you care about her. We think it's fantastic that the Man donates most of his esty monies to boobie causes too.