Doods! The people went to San Francisco so the Woman could practice walking next to water without falling in, and they saw this guy: 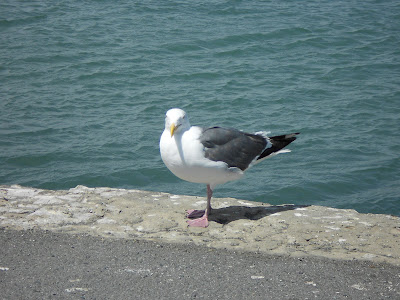 But did they think to bring him home for me?

I bet he would have tasted like chicken, too.

Damn, doods, I'm leaking like crazy here. Edsel the Pooch's mom, Sue, passed away on the 12th. She'd been trying to kick the snot out of brain cancer for a long time, and I think all along I just assumed she would do it. People get sick, people get better. And the people of the cool cats, well, they just have to get better.

Edsel started blogging about 6 years ago, and was one of the first, before the CB got to be so big... Man, I want to say more but things are kinda stuck.

If you never got to know him, go to his blog and start at the beginning, and you'll see what a cool guy he is. But doods...I gotta look over the 4th wall. Edsel was an amazing cat blogger because of his mom. She was something really special, and the CB is gonna be that much dimmer now.

It's hard enough when one of us takes our trip the the Bridge, expected or not, from old age or a sickness or an accident, but guys? We wouldn't be here getting to know each other without our people, so when they go it's like an extra kick in the nads. Edsel's mom was awesome, so it's a kick in the nads and someone pulling nose hairs, all at once.

Tomorrow the Woman turns Official Old. She's not happy about being old but she's kinda happy about not being dead, so there's not a lot of whining about it. But the better thing about her being Officially Old is that some peoples who donated to her Walk thingy are finally going to win prizes!

There's still time. Go to ROCK THE PINK and click on the DONATE button near the top of the page, or if you don't want to see her crappy 1st greader web effort just go right to the donation page. Every $5 is a shot at a 64GB iPad, a 3G Kindle 3, or a 16 GB iPod Nano.

Your donations are TAX DEDUCTABLE! And because of your generosity, she's doing stuff like in the picture, walking around San Francisco dressed like the Pepto Bismol Fairy.

Dooods...our good buddy Beau Beau went outside and didn't come back inside and his people are freaking and I'm really really worried. So muster up some Mojo and purrs and send out the energy to get his furry little butt home where it belongs 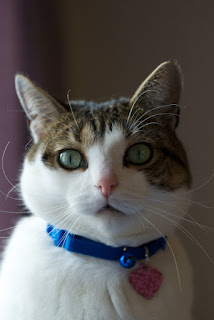 Get your butt home, Beau Beau!

Hey lady...look, if I'm licking your gross, sticky skin, it's not because I *LIKE* you. It's because after being outside all day practicing walking you need a bath. And since you obviously don't seem to be headed towards the rain box thingy, I have to do it for you.

Sometimes, I think you're worse than Buddah.

Doods, in honor of the Great Kismet, today is Whisker Hump Wednesday. No one could rock the Whisper Hump like Kismet could--of course he invented the term--but from here on out, we're making Wednesdays a Kismet Kinda Day, and we'll do our best to rock the humps. 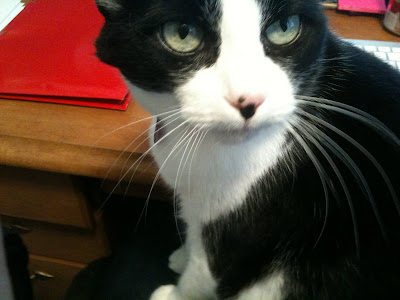 Kismet, dood, you are gonna be missed like crazy in the CB.


Don't forget, in less than 10 days the Woman is gonna draw numbers for the winners of an iPad(64GB w/3G!), a Kindle (wi-fi AND 3G!), and an iPod Nano (16GB!) All you gotta do to have a chance at winning is donate to her Susan G Komen 3 Day Walk for the Cure effort thingy by 8:59pm Pacific Time on August 26th (that's her FIFTIETH birthday!) Check out rock-the-pink for more details, or go right to her donor page. Every $5 is a chance to win! 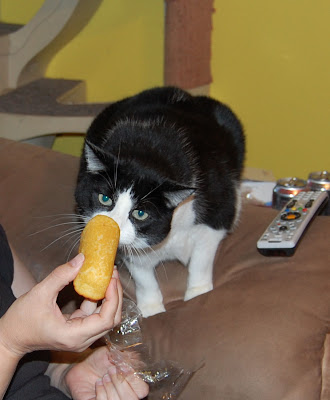 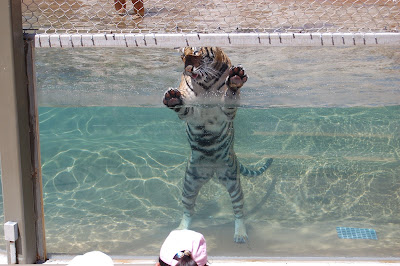 I found this on the People's camera.
They made this poor kitty take a bath!
And look at the size of the tub!

You can totally see it on her face:
Please let me out! Please!

Doods! I got to go out again, this time to the Olive Garden! I ate with Diva Kitty's Mom and the Man and the Woman. And there were wine glasses on the table, but no one offered me any. And you know, I might wanted to have tried that. 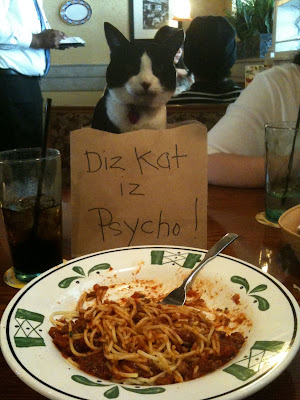 As you can see, I had the spaghetti. The sauce was tasty what with all the real live fresh dead cow in it, but the noodles...eh.

You can see, too, my People are morons. Look at what The Man is doing to me! Like he couldn't be NICE in a picture. DKM took the picture, BTW. SHE is polite people to have dinner with. Not once did she do anything rude to me. 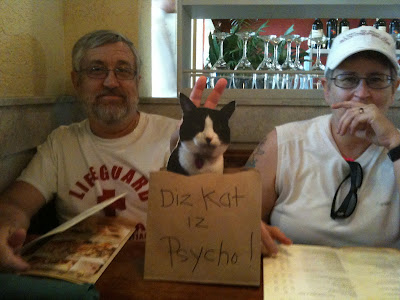 When we got home, there was something really cool. Look at Buddah's and my feets... 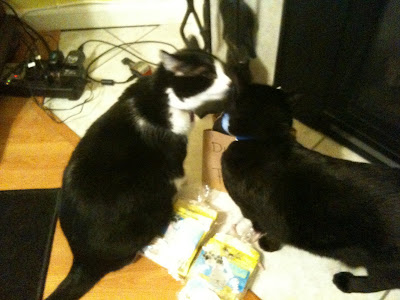 Kimo & Sabi's Mom sent goody bags with DKM for us! See how Buddah is sucking up to me? It's because 1) he didn't get to go anywhere, and 2) he wanted to be sure he got his.

That was wicked cool. Thanks Kimo & Sabi's Mom! And Thanks DKM for meeting us for dinner and bringing the goody bags!

I wonder where else I'll get to go...

Doods! A buncha the cat peoples got together for lunch today, and guess what! 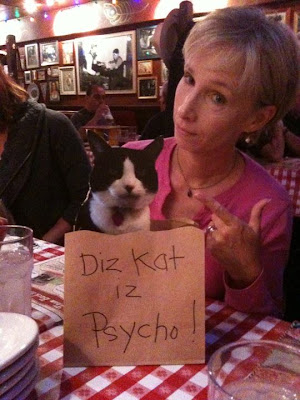 Here I am with Kimo & Sabi's mom in a picture taken by DKM. She thinks I'm nuts but even she'll admit I was well behaved.

And the best part?

The Woman wasn't there! Doods! I was out partyin' with the cool kids and she was stuck at home!

I finally got to have fun and she didn't!

Man, last night was a long one. Yesterday the Woman started feeling not-so-good and by bedtime she felt like krap, which meant I had to spend the night purring on top of her. I let her up once to pee, and while she was up she went into the kitchen to get something to drink, and I got kind of excited because she grabbed a can of stinky goodness...but, she wasn't going to feed me, she was just putting it on the table.

When she puts a can of stinky goodness on the table, that's to tell the Man that she's sleeping in and if he would be so kind, would he open it for Buddah and me? Only she's probably not thinking it as nicely. In her head it's more like, "Feed the damn cats, all right?"

So she went back to bed and I took a few minutes to eat some crunchy food and then use the litter box, but then I went back to purring on her. It must have been doing some good because when the clock thingy said 2:45 she said, "You're such a big help" as she tried to roll over.

You know, she could have said, "Max, I need to roll over. Could you move for a moment, please?" but no, she just started moving, which meant I either needed to hop off or get squished. I hopped off, let her get settled, and then hopped back on her.

At least she was polite and appreciative about my efforts.

She slept really late this morning, and even though the Man had fed us, I figured I'd better wake her up before it got to be afternoon. I mean, she'll need to be able to sleep tonight, plus, I was afraid she would wet the bed. I woke her up for her own good.

But man, she doesn't look good. She looks like... well, it's probably in your litter box, if you want to see.

They're getting all buff.