Ok...you know that litter oval? Turns out it's not the greatest idea in the world. You get in, and think you're all the way in, but you're not, and you wind up whizzing all over the floor, which is embarrassing as it is, but then the Woman gets all bent out of shape because I'm considerate enough to dig litter out and cover it, but nooooo she says it would be easier to clean up without the litter.

Well tough boobies, I cover like a good kitty should, and if she doesn't like it, she should replace it with a REAL box. One capable of containing my massive manhood.

Hey! People! It is inconsiderate and impolite to go to bed without first being sure that the kitty's food dish is full. And by full I don't mean a few crunchies to get through the night on: I mean full. Because, you know, just a few crunchies at night makes a kitty nervous because he might starve to death before morning, so if the dish isn't full, no one is going to sleep through the night...
Posted by Max at 9/22/2007 10:11:00 PM No comments: Links to this post

Aye, tis' talk like a pirate day, gar! So let's discuss my new litter box, gar! I'm rather likin' the new o'al box, but the Woman says cleanin' it out is a pain in the butt because thar's no straight edge t' butt the scoop against. Not my problem, Me have a nice clean place t' poop, she can figure out the particulars. Aye, isn't that why People exist? T' clean out our litter boxes and make sure we have fresh food? Aye. If she complains one more time, she can walk the plank. Or be cleaning poop off her pillow. Either would work.

Hahahahaha...the little litter box was too little; I got in but all of me didn't make it so I wound up peeing on the floor. But I was good, I dug some litter out of the box and covered it up lest the furless ones be offended. Later that day when I went in there, there was a brand new big litter box. The People can't open the door all the way because the box takes up so much floor space, but at least now I can actually get all the way into the box.

Wait...is it still a box if it's oval shaped? I have a litter oval, now. 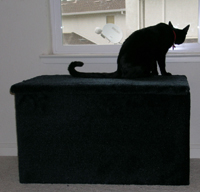 The Woman originally bought it to hide our litter box, but we hated it, so it became a kitty hideout for a while, and then was largely ignored.

Well, we moved into this house and there was no obvious space for the litter box, but the was a nice nook upstairs that this fits into, so it became the litter box hideout again.

Did I mention that I hate it?

I tolerated it for a couple of weeks, but I can only take so much. So I stopped using it. And the Woman scooped yesterday and today and kept commenting about how there wasn't much to scoop up.

Well, by this time I really had to go.
Really.
Really really.

So everywhere she went, I found a box to jump into and I scratched at the bottom like there was litter. She laughed and said "Sure, you can play in all the empty boxes."

She sat down to watch a little TV and there was a box there so I jumped in it and scratched again, then I got out and scratched at the floor, and then got back in the box...it was like the light bulb suddenly went off; her eyes got wide and she said "You really have to go, don't you?"

After sharing this momentous realization with the Man she went out in the room where the rumbly bikes sleep and came back in with a small litterbox and jammed it between the wall and the People litter thingy in the tiny downstairs litterbox room, filled it with litter, and came and got me. She showed it to me and then backed out to give me some privacy...

Oh man, do you know how GOOD it feels to pee and pee and pee when you've been holding it for to days?

(Well, she thinks 2 days. I'm not showing her a few select places around the house..)

The Man says if they leave the top open on that big box I'll use it, so they might try that. But the Woman says they'll keep the little box, too. Which is good, because the next step was, well you know...pooping on her pillow.

Bulleted For Your Pleasure

It's Iam's MultiCat that the Woman puts out for us now.
Apparently, Buddah can gain muscle on it while I cut fat.
I do enjoy it, I must admit...it's nice always having food out.
If the Woman keeps giving us chicken on the side, I might learn to live with it.
Posted by Max at 9/07/2007 09:10:00 PM No comments: Links to this post 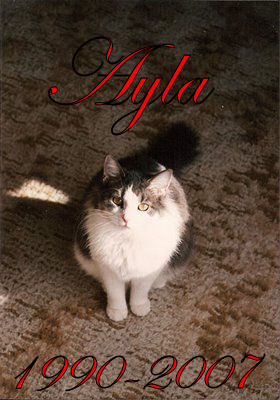 Ever since I met Ayla online, I had that thought in the back of my head that if I was equipped for a girlfriend, Ayla would be it. She was my fellow grump, as snarky as I could be on any given day, and she understood the plight of being pestered by younger kitties. She was far too beautiful for the likes of me, but that didn't keep me from admiring her.

I can't imagine the blogosphere without her there. We've lost so many kitties in the 'sphere lately. I hated the idea of Ayla in pain, hardly able to eat, and I'm glad she's romping around the Rainbow Bridge with all the rest of the kitties who have gone to pave the way for the rest of us, finally free of the tumor that had been bothering her so much lately.

Tonight, after the People had dinner, Buddah and I heard the distinct sound of the plates upon which Stinky Goodness are heaped being taken out of the cupboard, so we ran to the kitchen with hope held high, just like our tails, which were all atwitter thinking we were going to finally get some REAL food.

But there were no cans out, and the Woman didn't move towards the place where I know she's hiding them.

She had this container full of chicken that they had for dinner the other night, and she said they weren't going to eat any of it, so before it got thrown out because the people who seem to love trash are coming to pick ours up tomorrow, she thought we would each like to have a bite.

She cut up A WHOLE BUNCH of chicken and put it on plates for us. AND THEN BUDDAH WOULDN'T EAT IT! He sniffed at it and then jumped up on the refrigerator. I know he doesn't usually like chicken but it's been so long since we had decent food...

Anyway, she put that plate down on the floor and I started to eat, and i wanted to scarf it down but I thought I should go slow, because who knows when we'll get anything that good again, so I took my time--and when I was done she gave me part of Buddah's!

I was STUFFED when I was done.

And don't feel bad for Buddah. The Woman said "Oh, sweetie," =GAG= "I know you don't like chicken." So she opened a bag of crunchy treats and gave him a bunch, right there on top of the fridge.

So Buddah was happy, I was ECSTATIC, and the Woman feels like she did a good thing by letting someone have some chicken before it got tossed out.

Now that we don't get Stinky Goodness (and dammit, I have ENERGY now! She says I feel a little lighter, and she caught me running earlier) I'm hoping the sound of those plates means TREAT TIME.
Posted by Max at 9/06/2007 08:40:00 PM No comments: Links to this post

It's not just vishus deer...

We need to watch out for the squirrels!

In other news, there's still been no Stinky Goodness, and dangit, the Woman picked me up today and said I felt a little lighter. There was some tasty chicken tonight, and I got some really good bites of it, and there's always dry food out so I can eat any time I want. But no Stinky Goodness.

I don't mind being fat. Why should they care??? 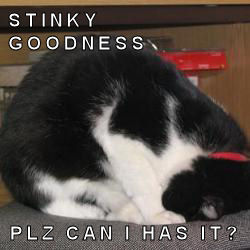 Oh man...I think the People are serious. There hasn't been a can of Stinky Goodness in like FOREVER. Or since Thursday. Whatever. It's been a long time.

The only good thing about just getting dry food is that if Buddah is eating and I sneak up on him, he jumps REALLY high, and sends the whole bowl full scattered all over the floor. And that annoys the Woman, which makes it at least 4 kinds of fun.
Posted by Max at 9/02/2007 09:08:00 PM No comments: Links to this post
Newer Posts Older Posts Home
Subscribe to: Posts (Atom)