Why do I like it this year? Because the People aren't even gonna answer the door so I don't have to put up with Sticky People and their freaky costumes begging for treats, when I know perfectly well that I'm not getting any treats.

The Woman says it's because last year they only got 2 kids at the door and they were like teenagers, but I know the 2 ultimate truths:

I'm totally on board with the no Sticky People thing this year.

But, to celebrate anyway, I leave you with some festive LOLz... 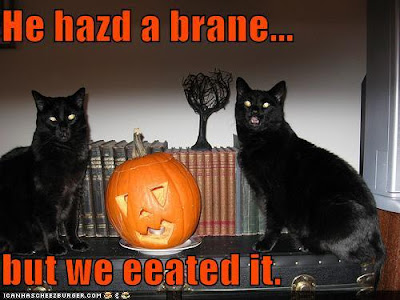 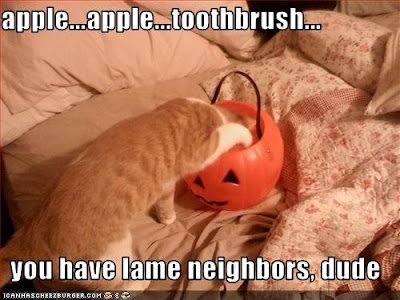 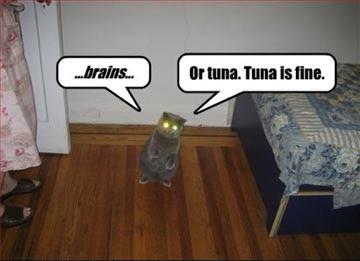 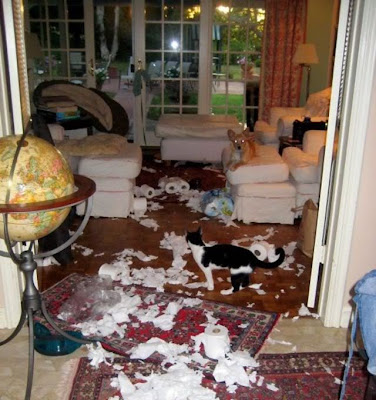 When I started blogging I was two years old. TWO. I was like a feline sticky little person, but better because I was never, you know, A PEOPLE. I mean, I used big words like "egregious" and used them correctly.

Doods. That was seven years ago.

The cat blogosphere was a tiny, tiny place back then. So tiny that I couldn't find any other blogging cats at first. Then I stumbled onto Timmy's blog, and Prince Muddy's, and before I knew it, you guys all found me and there were more blogs and =BOOM= there was an entire cat blogosphere.

It was really nice to have other kitties to talk to, because my People? Not so entertaining. I had Hank the Dig back then, too, but being a woofy and all, his appeal was limited.

Since I started the blog, Hank has gone off to the Rainbow Bridge, and so have a lot of my cat friends. I miss them a lot, even though I know I'll get to see them for reals some day.

I've had to do the m-word more times that a kitty should have to in a lifetime, but I think those days are over. My people finally bought me a forever place; I mean, they were my forever family, but we didn't have a forever house, and now we do. I like the idea that this is it, this is where I'll leave for the Bridge from someday.

I got stuck with Buddah. Life was pretty good; I was an only pet and enjoying it, when all the sudden there was this little black puffball of terror, riding me down the hallway like I was a pony. I tried, but I still don't much like him. I still try sometimes, but then he bites and all bets are off.

I nearly died that one time. When Buddah showed up, so did Buddah cooties, and I'd never been immunized against them. I don't ever want to be that sick again. I mean, doods, I didn't want to eat! Not anything! And that's just not right.

But most of all in 7 years I've come to see how generous the kitties online can be, and how well they guide their people. Kitties raise money to help other kitties; our people raise money to help kidneys and MS, and BOOBIES. And they do some really tiring things to get that money.

I'd like to think I have another 7 years in me, but I am 9 years old now, and battle the bulge a bit. So who knows? All I know is that I've had a really, really good time, and you guys make my life all that much better, and right now, I'm more than a little bit nipped out.

It's Derby's birthday, and in honor of it everyone is celebrating 'Tocktober!

This is as close to our 'tocks as the Woman could get... 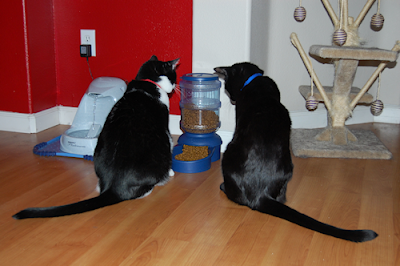 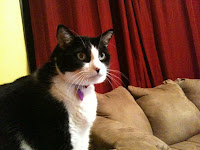 The Woman thinks that when she took this picture I was looking off to the kitchen in hopes of food.

But really? I heard the Man say something about calling the dood who cleans the fire box thingy so that we can turn it on and have fires.

I have missed lying in front of it and getting my furs all toasty and warm. Summer is nice with the cold air blowing thingy and all, but nothing beats a good fire roasting your chestnuts.

Doods, Look!
THIS KITTY GOT HIMSELF A VISHUS DEER!
AND LOOK WHERE HE STUCK IT! 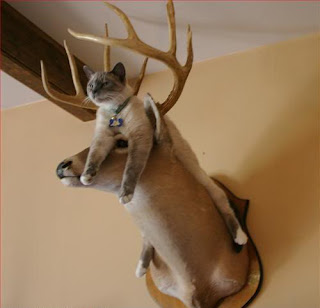 Hey doods, today is Commander Spitfire's birthday. His blog is new, and it would be really cool if a bunch of us went over there and said hi and happy birthday. He's a year old! We all remember how exciting that was, right?
Posted by Max at 10/15/2010 07:57:00 PM 5 comments: Links to this post 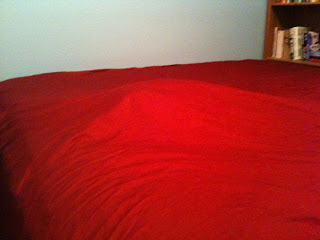 Really...she can't change them without my help... 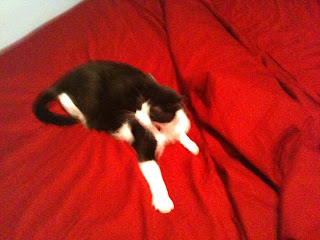 OK. Wendell's person is looking at an apartment that's on the 10th floor, and it has ancient windows that open to the outside--no screens. It's not especially cat-safe and needs to be...if no good ideas can be coughed up, she's going to pass on the apartment, and other than the window issue it sounds like a good one.

So...ideas, please. What can be done to make these windows Wendell-safe, so that he doesn't accidentally plummet 10 stories down?

Baby gates are a no-go, the ASPCA says no. 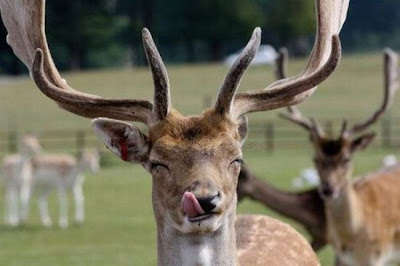 And the Man didn't go back and get the Woman, so it's safe to say he just left her there.

Ok, the Man came home without the Woman. It's fricking hot in this house and I was kinda-sorta glad to see his opposable thumbs, because that meant he could turn the cold air blowing thingy on, but he left the Woman!

So either all that walking practice was for nothing and she's so bad at it that it's taking her for-freaking-ever to walk, or he got fed up and just left her there. Or maybe he just forgot her!