The basket of towels in the bathtub is mine! It's my napping place! And the Woman won't make Buddah get out! I tried plopping down right on top of him and he LIKED it.

'Cause Oreo totally needs to see this...
I present once again, the see-through box: 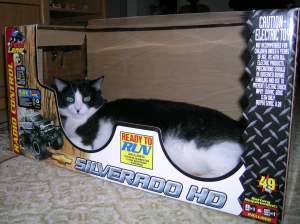 He bit me on the ass! That little monster walked up behind me, bit, and then ran!

"Max," she said as I was jamming my nose up her left nostril, "you obviously feel like your old self again. And I'm not sure that's a good thing."

"...and you're downright rude about it."

"You're acting more and more like you did when we lived in Ohio. Like you feel really good now."

And that's a bad thing?

Usually she complains that we eat too fast, now she's complaining that we ate our snack too slow.

Who'da thunk it? A kind of Stinky Goodness I don't like. The Man gave me Chicken Hearts & Liver this morning, and I disliked it so much that I refused to eat. Well, that and there was medicine in my food, which made it taste even worse... Later in the day they were desperate to get the medicine into me, so they opened up a can of Fish & Shrimp--Stinky Goodness of The Gods--and I ate that in as few bites as I possibly could.

The last few nights I've been singing in the bathroom, and the way the Woman acts you'd think it was horrible or something. She's focused on her lack of sleep, not the art of my sterling vocals. You'd think by now she would learn to appreciate the finer things in life.

The Woman did not make the computer available to me yesterday; every time I thought about wanting to use it the top was closed and she was alseep. Right in the middle of the freaking day! Just snoozing the day away. I tried asking a few times, but she was so far off in LaLa land there was no getting through to her.

I'm not surprised. She was up most of the night before, making gross and disturbing bodily noises. At one point I poked my head up out of the tub (yes, was I sleeping there. What about it?) and asked "What the hell was that?" If that had been me, she would have whisked me off to the stabby place first thing in the morning. But does she go to the stabby place herself?

Hell no, that would make sense. She just stayed in bed all day, alternating between watching bad TV and sleeping. Buddah and I both jumped up on the bed to see if she was still breathing; since he wiped his butt across her sheets and she had to get up to stick them in the washing maching, we were satisfied she wasn't going to die on us.

Ya know, I'm just going to accept the inevitable. I can't stop the People from moving, and the more I think about it the more I figure it won't be too bad. I don't like the idea of going to somewhere with new smells and rooms that I have to get used to, but at least now I know that moving doesn't mean losing all my stuff.

I've missed having windows I can see stuff out of. And maybe there will be Sticky Little People there I can watch play outside. And the People say the new place is much bigger, with lots of places to explore. And I do miss stairs.

I just don't like the idea of actually moving. The Woman says she's worried about what the stress of moving will do to me...I'm kinda worried about that, too, because I am gonna be stressed out and that makes my tummy hurt an awful lot.

The People brought some toys home today...Buddah destroyed one in about 5 minutes. I never got to play with it! I probably wouldn't have played with it, but that's not the point! I should have had a chance!

The People really are gonna do it. They're going to implement the "M" word and force us out of our nice, cozy domicile. They think this place is too small and that they're tripping over each other, but I think it's fine.

Now, the Woman did say that there are windows to really see out of, ones that aren't blocked by bushes, and we'll have stairs to play on, but still... Moving is a pain in the butt and I would rather not.

Evidently it's going to be a couple more weeks before we actually have to leave here...all the more time for me to get more and more ticked off.

OK. The People were out, then came home, and fed us early.

I think I should worry about that. We never get fed early. Usually it's late.

Coming home an hour late for dinner is not acceptable. The only good thing about it was that the Younger Human fed us when he got home, and he gave me MORE than those People do...

Coming home late is especially unacceptable when looking for a place to move to.

They could have at least brought home some special treats, but nooooo...why bother thinking about the kitties they left behind? I was even nice to the Woman today and napped while stretched across her neck as she watched a little TV this afternoon. You think THAT would get me a treat or two...

AND the Woman obviously ate some fish while they were out. I can smell it on her. Did she bring any home?

Noooo.... THAT would have been nice. God forbid she does nice...

I have to give the little monster some credit here... this morning there was an off chance that the Woman might give us treats in the kitchen, so we scrambled to get there as fast as we could, and halfway down the hall he leap-frogged right over me. His grimey little paws never once touched me. Just up in the air, sailing right over me, and he landed without getting his butt in my face.

You'd think that after witnessing that--plus the fact that we ran nicely together and no one tackled anyone else--she would have gotten us treats, but noooooo, all she got was the newspaper.

I'm used to all the disappointment that comes from living with these People, but you'd think she'd spare a baby from it...

Well, he doesn't look like a baby anymore, he's over 8 pounds already, but for all intents and purposes (meaning when we want snacks) he's still a baby.

The Woman wants to know why I like to stand on her lap and then rub my face against hers so hard that my lips wind up smearing across hers.

Well, lady...it's that I just finished licking my own butt, and I wanted to share.

Even drugged and looped to the proverbial gills, I'm still the king. The People shoved this pill down my throat this morning, and I got all warm and fuzzy and quite relaxed...but then the Man took me to the stabby place. Drugged or not, I still fought hard and pooped all over everything.

The bald guy asked the Man to leave me there for a while so he could give me a shot to make me even more loopy. I was all for that. But then he decided I was loopy enough, and before I realized what he was doing he stabbed me in the leg and got my blood anyway. And THEN someone BATHED me. Like I can't do that myself! They only washed my butt off, but still...

I would hope the People realize that I feel just fine. I think I proved that with a lot of toothy growling and biting and pooping at the stabby place. There's no need to take me back.
Posted by Max at 10/04/2005 01:42:00 PM 2 comments:

I overheard the Woman talking to the Younger Human, and apparently they think they're taking me back to the stabby place tomorrow for "followup blood work."

They need to think again.

She did say the stabby place gave them a drug to give me before they take me over...I might be willing to take the Fun Drug, but I will not willingly allow myself to be stabbed again.