Man...I got all excited today because I saw a link to these spiffy Cat enclosures and I followed the link and it made my little heart sing to find these: 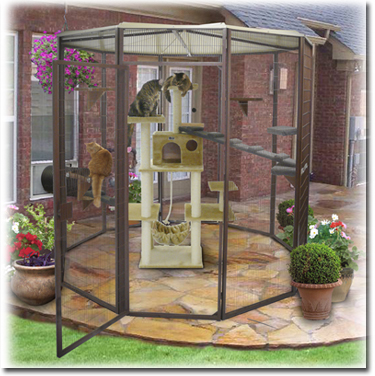 It would let me be outside without being outside there's a thingy that goes from a window to it so the People wouldn't have to get up and down every time I wanted to go out or come in! It's BEAUTIFUL!

So I hollered until the Woman came over to look and she agreed, that is one spiffy thing for a kitty to have. So I said NICELY "Please? Please will you buy me one? Please?

And she poked around the website and said, "You got two thousand dollars, Big Guy? Because that's what it costs."

I did not ask her if *I* could buy one. I asked her to buy me one. But before I could clarify, she said to start saving my money...

She didn't even let me get to the part where I was gonna promise to share it with Buddah!

Didn't I just write a book?

Where's my money from that????

I want my freaking money!

Ok. So the other day Buddah finds this thing that looks and smells like a treat. So he tastes it and sure enough, it's a treat. But the Man sees it and gets his panties in a wad, and takes it away.

A perfectly edible treat! And he throw it in the trash!

So later on he went to pass gas, and the Woman went to bed, and Buddah got all stealthy and when she was good and asleep, he went into the extra room where all the unwanted boxes live and started digging around.

He made a lot of noise so I told him to be quiet, but he kept digging around and pretty soon he tossed down this treat bag and dooods! It smelled like BACON! So I chewed the bejeebers out of that bag, hoping to nom off a little of the bacony goodness. BACON, dooods!

But then it happened.

And SHE came in to see what was going on, and she took the bag away, and you know what she said?

"That was full of dog treats, Max."

We don't HAVE a dog. IT WAS BACON!

But Buddah stayed very quiet and I could see he was eyeing the box he'd gotten the bag out of, so I didn't say anything. I waited for her to throw it out and go back to bed.

But...between the trash can and heading back for bed her brain engaged and she came back into the room to check the box. And dooods, I wanted to cry. Inside that box was a PILE of BACON. Oh, she still says it was dog treats, but I know what BACON smells like.

And she threw it away!

And then she closed the door so we couldn't look through boxes for more!

I am still so upset.

How could she just throw it all away???

Heh. Know what? To a sleeping person, when a kitty attacks a Turbo Track toy at 2 a.m. it sounds JUST like someone trying to break into the house. Oh, and the Woman says that for anyone getting one for their kitty, if they have wood floors, they might want to put a rug under it, or else they, too, might experience the joy of being jolted awake with a WTF! alarm.

When she jumped up and ran down the hall...well, in the words of the grate Jeter Harris, we was laffin' and laffin'... Grrreta mentioned getting on from Amazon so I went and looked, and Amazon has it! (well, it's not like I didn't believe her...I went to see how much it was...)

To get the shape we got you need more than one kit, but I think you could have fun with just one kit, too. And Buddah still goes nuts for it, so it's not one of those toys a kitty plays with for a day and then leaves alone. Plus, you can change the shape so it's a whole new toy.

I know some of you wanted one...it's about $22 at Amazon. Just wanted to tell you, in case you wanted to either get one or stick it on a wishlist.

Because reminders are a good thing...

clicky
Don't forget we're writing a book and you absatively, posalutely wanna be a part of it.

In other news, WooHoo I got the fire thingy today. Buddah had to ruin it by plopping down right in front of it and hogging all the warm, though. I'll get even this week when it's nice and the see through door is open; I'll plop down there and soak up the niceness. That'll teach him.
Posted by Max at 3/22/2009 06:49:00 PM No comments:

It's a conundrum, it truly is. Spring is here, which means the windows and the see-through door that's impervious to Buddah's Claws of Doom are open and we can feel the breeze come in, and it's really, really nice. I can sit on one of the climbing trees ad talk to that rude kitty outside, even though he won't answer me. It's just lots of fresh air.

But...now it means the Woman isn't turning on the fire place thingy. I like the fire thingy. It has a blower on it and it blows hot air out, and it hits the floor right where I like to nap. It's like a sunspot on demand. Well, on demand if she would turn it on.

She says I can't have it both ways. It's either warm enough to open the windows, or cold enough to turn the fire thingy on.

But I would like to have it both ways.

It bites that I can't have it both ways.

What would be nice is if one day it was open-window-nice, and the next day it was cold and rainy and fire-thingy-nice. The Woman seems to think that would drive her nuts, but hey, that's just a bonus!

See what I mean? A total conundrum.

The Woman has been so busy KINDLIZING stuff (I don't know what that means but it doesn't sound good) that she hasn't made a decent lap for me in about a WEEK. I was reduced to sitting on the Man's lap! His lap just isn't as squishy and therefore not as acceptable.

Now, I heard her say that she had Kindlized HER stuff...and then she looked at me and said "You're next, Big Guy."

Aside from not knowing what the heck that means for me, it means NO LAP! He's not getting his presents until later, and because there's some Meezer in him somewhere, the People are having ham for dinner and he gets a taste. I am going to let him sleep on the long floppy pillows on the big bed without bothering him, and if he wants I might even play THOE with him. Maybe. We'll see.

Yeah, I was trying to talk to that kitty outside. Yeah, I sat there and yowled and yowled, trying to get his attention. No, I did not realize he was ceramic. At least now it makes sense why he kept his back to me and wouldn't turn around no matter how nice I asked.

The Woman is "working" which means Max does not get to blog. I don't know why; we have more than one computer but leave one on just for Max? Noooo....

And yes I speak in 3rd cat when I'm annoyed. We KILLZ U with r Lazer Eyez!
(Ok, only if you're a people living in this house)
((The rest of you are safe.)

Y aknow, a bunch of you told me a long time ago that I'd probably like using Google Reader to read blogs, since Blogrolling was having a months-long case of PMS. But I stuck with my blogroll, checking 50-60% of the blog on it every day (I used to do them all, but I gots too many now). But after they "fixed" Blogrolling and there are ads, and it's slow...I opened up Google Reader (I had put my blogroll in there a long time ago) and dang! It really is easy! I don't have to check hit and miss cause it TELLS me who posted!

I'm not going to delete the blogroll because it's there already, I just won't really use it. But maybe now I can get to more blogs every day because I seem to have more time, now that I'm not opening each and every blog by paw.

In other news, I lounged in my PTU this morning and hocked up a hairball in it. This pleased the Woman, as evidenced by her saying "Oh THANK you" as she cleaned it up.

Ever wonder if dogs and cats dream?

Now you know.
And you can laugh because it's, you know, a dog.
(Ok, you could laugh if it was a kitty, too. But then you'd have to go find the nearest kitty and give him crunchy treats as penance.)

The One Where I Want Buddah To Move Because It's MY Lap... I would have made him move, but then I would have gotten yelled at, then set on the floor, which kind of defeated the purpose of sitting on her in the first place. Plus, since I was good about it, when she had to get up to pee, we got crunchy treats.

We both plastered ourselves on her this morning, but apparently that doesn't count as being good because one of us plopped down across her face.

Hey, I left her nose open, she could still breathe!