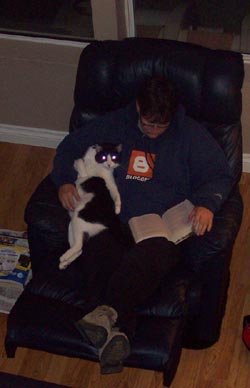 It doesn't matter what it looks like or what she says was going on.

I was not snuggling with the Woman.

She just happened to be in the chair I wanted to be in, and she said she was cold so I figured I'd kill two birds with one stone: I'd sit on her and be in my chair, plus she'd be a little warmer.

And I would have plastered myself clear across her lap to make my point (being that it's my chair and I'm only letting her sit in it and I'm only being nice in keeping her warm), but she had that book, and dang that is one BIG book. My only choice was to sit like a person.

And I was sitting like a person, but somewhere along the way I got a little sleepy and shifted a bit. And then slid a little bit. I had my hear on her arm and was =this= close to dreaming about an endless supply of kitty crack and Stinky Goodness, when I realized the Man was up there just past the high wall with that clicky flashy box.

But I was not snuggling. Nope.

Geez, people, stop messing with the clocks! I don't like it, and it confuses my tummy. Put them back where they were yesterday so the Woman stops whining about dark it is at dinnertime and how she has to be home at the same time as all the 8 year old sticky people, and leave it there. Seriously. we go through this twice a year and it's time you started listening!

This Is A Public Service Announcement!

Sometimes people just get it right. Maybe not my People, but people in general. Like the people who make Stinky Goodness.

Life without Stinky Goodness would just be all hairballs and crunchy food, and I didn't think it could get any better, but...

They have a new Stinky Goodness.

It is the most awesome Stinky Goodness.

The Woman says it's freakishly expensive Stinky Goodness but she still bought us several cans of it and will stock up when she finds it on sale. It is SO GOOD that when she gives it to us, we make piggy sounds while we eat. There's lots of snorting and grunting and the sounds of Could life get any better than this???

You have to get your people to get you a can or two of this. If they balk, tell them it's healthy because it's got GREENS in it. Yeah, I don't care about that either but people seem to.

Oh man, I hope we get it for dinner tonight, too.

If you're downstairs doing whatever, and I'm upstairs calling out to you, that does not mean you should sit there and tell me to come to you. If I wanted to come to you, I would. I wanted you to come to me. Sitting there arguing with me won't change my mind about where I want you to be; it only annoys the Younger Human who has to sit there and listen to you argue with the cat...

HAPPY BLOGIVERSARY TO ME!
3 years today.
You're welcome.

Someone has to go to the stabby place tomorrow.

Things On My Mind Today...

Check it out.
The Woman found it on Fark.com.
Click to biggify and see the coolest picture of a cat tongue ever.

ANGEL N TAZ are back online!!!

Why did I kick so much litter out of the box?

So you could feed the new sucking monster.

See how considerate I am?

It's bad enough that the People have one of those horrible sucking monsters that eats everything in its path, but when it got sick and started puking things up instead of eating, did they take that as a sign that we would be better off without it?

No, that would make sense. When the sucking monster started vomiting up bits and pieces of its previous meals, the People went out and bought another sucking monster. One that's more powerful. One that can suck the fur right off a kitty's back!

As soon as I saw the Woman move it onto the carpet, I ran. I'm not stupid. I have glorious, beautiful black and white fur and I intend to keep it. But Buddah...sheesh. He stayed. I heard the Woman say "You might want to go upstairs," but he just sat there.

Until she turned it on that is. Then I heard his feet thundering on the stairs. But did he engage in appropriate kitty behavior and hide under the bed?

No! That little monster just jumped onto the High Place of the wall, and watched the Woman feed the sucking monster! Is he insane? What if he had fallen? Then he'd be all Humpty Dumpty & chit, and the Woman would NOT try to put him back together. She'd just let the sucking monster clean him up.

I keep trying to tell him, but he won't listen. There are some things you just don't do, and staying in the room with a feeding sucking monster is one of them.

Ok...today was the deadline for submissions for the Incredible Wonderful Book that we're collectively writing.

Was is the operative word here.

There just isn't enough material for a book just yet. We need a whole lot more, otherwise what we'll wind up publishing is more like a chapbook.

So...we're extending the deadline. Let's shoot for November 15, and the Woman will push really hard to have it ready for the holidays.

My links list is getting very long.
Verrrrrry long.
I had to do something about it...

Now, no one got cut from the list, nope nope nope. What I did was create a separate page for links (Clicky here to see) and then created a blogroll... Everyone is still in the blogroll, but it will only display a few at a time, and in random order.

So if you don't see your link there, I'm not being a meaniehead and dropping your blog, it's just not in the currently viewable rotation, but IS still at the List O'Links page.

If this doesn't work well, I'll just put the old list back up, and the people who email me whining about how long my list is and how much sopace it takes can then kiss my furry...tail.

But yeah, it is getting a little long and I see their point.

It's right on the top of their little heads...

Look, you put your face near my butt, I'm gonna cut loose with a really good one.

All right. Buddah seems to think being up as high as he can get is like Teh BEst THiNg EVAH !!111!! So I figured what the heck, I might as well check it out. It might be a decent view. 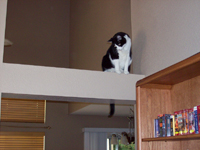 I'm not terribly impressed. It's too much work to get up here, and it's not terribly gentle on the tootsies when you jump down.

However, Buddah needs to be warned: I know the way up now, and I can get up there to push his sorry butt down if I want...

Okay. If you open the pantry door and I sneak in, whereupon I curl up behind the canned goods where you cannot see me, and then you close the door, thereby locking me in, of course it's your fault.

It certainly can't be mine.

It's The PsychoKitty Caption Game! 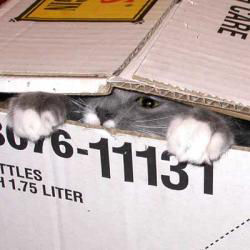 Just think of a caption, and submit it in the comments.

Who knew she wouldn't look where she was going, step on my foot, make me shriek, and as I tried to run away I would go between her feet and trip her up so good that she fell flat on her face?

No one was hurt, so it's funny.

Really. And it'll be even funnier if she has a big bruise on her hip tomorrow. She seems to think she will.

A person ought to watch where she's going, eh?

I took a nice, leisurely nap this afternoon, curled up on top of the climbing tower. I don't know where Buddah was and I don't really care, because it was an awesome nap. When I woke up I felt all warm and wonderful and nicely refreshed...

...and then I went downstairs. The People had moved all the stuff around! Sheesh, for a minute I thought we'd moved again.

People, I don't care if the couch made the family room feel too small. You put it there first, it should have stayed there. I don't care if it looks all spiffy in the living room (and why is it a living room when no one ever goes in there...?) with the bookcases and the big comfy chair. You moved it and made me upset, and that's what matters.

No, don't move it back. Just leave things alone already!

Oh, and get me some crunchy treats. I deserve that much. 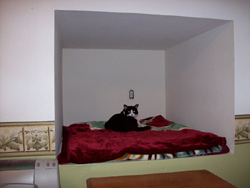 The Woman's office has this thing she says is called a "media nook" but she put the fuzzy blankets in it and it's a special Kitty Lounge!

Is that awesome, or what???