When a kitty is coughing, it is NOT nice for the other kitty to jump on his back.

The more you know...

Miles and Sammy tagged me to come up with a Proverb, but it took me a while because I had to ponder what would be the absolute truth, and after many hours of deilberation, this is what I came up with, the undeniable Truth of Life:

Give a cat a crunchy treat, and he will eat for a moment; teach a cat to open the crunchy treat bag, and he will leave you alone for at least 67 minutes.
Posted by Max at 7/28/2007 10:05:00 PM No comments: Links to this post
I think this guy deserves his very own bag of crunchy treats AND some fresh live dead shrimps...

To my way of thinking, since the Woman is the one who usually opens our cans of Stinky Goodness, then when the Man does it that shouldn't count as a meal. That should count as a treat. So if the man has given us Stinky Goodness, it shouldn't surprise the Woman when we ask for more food 20 minutes later, and she should just bend to our will and give it to us. That makes sense, right?

My head's gonna explode.
We might be able to m-word next door after all.
I wish everyone would make up their minds.
That lady is coming over again on Thursday, and I'm thinking if she says no, I'll just have to poop on her shoes or something.
(she was really nice, but sometimes nice people need to be pooped on.)

In other news, Buddah has learned to annoy the Woman during the day by meowing at ALL the doors. He's also plopping down on her face in the middle of the night. I'm kinda proud!

WooHoo. Today we got both dinner and snack early. They Woman said it was because she was in a good place to pause and as soon as our plates were in front of us she said she was going back to Harry Potter, and I'd like to thank him, but really all she did was park her butt in her chair and then picked up a book. Go figure.

I'm kind of hoping for some crunchy treats later, but she's done with the book and I still haven't seen anyone who could be named Harry--though there was this lady in here yesterday but I don't think she was Harry, I think she was just the lady who was saying we don't get to invoke the M-word into the house next door--so I don't have my hopes up.

I can still hope, though. The Woman thinks we were up there together plotting what to do to here.

You gotta keep your People on their toes, after all.

I'm also not saying I was thinking about pushing Buddah off of there...

Buddah is talking to the wall. I'm not kidding. He's sitting across the room from the Woman's desk, looking at the wall, and meowing his little fool head off. She can't figure out what he wants, but we're both pretty sure that if the wall is talking back and he hears it, it might be a good thing we're moving soon...
Posted by Max at 7/13/2007 07:53:00 PM No comments: Links to this post

Earlier the Woman was saying she wants to dig through stuff and find things to put on eBay. How much ya think I can get for Buddah...?

This is wrong on so many levels...

It's also almost 6 minutes long... don't let your people see it, whatever you do.

Rocky from Artsy Catsy gifted me with a Rockin Boy Blogger Award. Ooh yeah, I be cool...

Timothy Dickens was one of the first cat bloggers I found. I'd been blogging for a long time and it felt very lonely in the blogosphere without other cats to talk to. He also convinced me to stop saying bad words. I still THINK them, but I'm more careful about saying them.

William was another one of the first I found. I revel in his awesome capacity for destroying things. I can only hope to some day have his Mad Skillz.

Oreo is supercool. AND he was one of the first to spot Vishus Deer! He also kinda looks like my twin,. so he gets cool points for that.

Edsel confused me for a while 'because I couldn't wrap my brain around a kitty being called "The Pooch." I learned about the existence of Tuxedo Bears from him! Bears that look like they're related to us!

Jinky doesn't blog as much as he used to, but I always look forward to his patrol reports. He's super observant and keeps Catifornia safe.

Skeezix just makes me laugh, sometimes so hard the Stinky Goodness I ate an hour before threatens to squirt out my nose. He tells a good story and really should become a Famous Author. Or maybe just a Famous Writer. Famous Authors have to stick their little pinky out when they drink, and I don't think he has one.

Dragonheart is the first kitty without fur that I've ever seen. He lives in Germany, and the Woman used to live there when she was little and tells me about it sometimes. He's wicked cool looking AND International. I think that plus being his family being Canadian gets him, like, 3 extra cool points.

Derby says he's sassy, but really he's just a very nice kitty who lives in a place called Whiskonsin. He's surrounded by cows out there, but that's not so bad since the cows give the milk that makes cheese, and cheese is a very tasty product.

Luxor makes the Woman squeal. She thinks he is adorable and loves to see pictures of him. I just think he's pretty cool and I make sure I always at least peek in on him every day.

OK...that's ten. But there's one more...I want to award a posthumous Rocking Boy Blogger to Purrsident Larry. Larry was a wicked cool cat, and managed his purrsidental duties even when he was fighting diabetes and looking over the other kitties in his home. I'm glad I got to meet Larry online and I'm gonna remember him forever.

The People keep whining about how hot it is outside; yesterday it was over a hundred degrees, and today I heard the guy on the TV say it was 108. Now, inside it was very nice. The Woman said she was going to set the cool air blowing thingy so that it was 76, and I didn't think it was hot at all. Which begs the question: if it's nice inside and so freaking hot outside, why didn't the People just stay inside with the kitties??? You get no sympathy from me if you go outside ON PURPOSE when you know it's hot enough out there to blister the pads on a kitty's feets. Really now.

It's The PsychoKitty Caption Game! 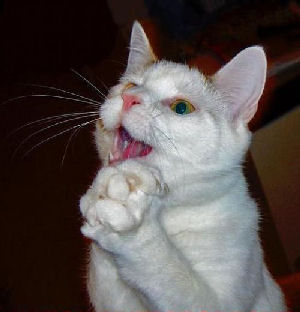 Just think of a caption, and submit it in the comments.

If the first kitty playing assigns a name to the kitty in the picture, then that's the name everyone has to use!