Ok...I'm really good all day long and I do the cute thing by jumping in the Woman's lap and running my face against hers. What do I get for my efforts? NOTHING.

But all these little MONSTERS come to the door and just LOOK cute, they don't even DO anything, and what do they get? TREATS!

Well now. I still haven't gotten into the trash, but there have been no treats forthcoming to reward me for this.

The People need to MAKE UP THEIR MINDS. It's not like I have some pressing desire to play with their trash, but c'mon. Be consistent. Tell me I'm a good boy and hand over the Temptations!
Posted by Max at 10/30/2008 06:56:00 PM No comments:

Tonight the People came home from Wherever, and the Woman looked at the trash can and then squealed "Good boy!"

And then she gave us treats.

Who knew NOT getting into the trash could get a guy some treats? And why don't I get treats EVERY time I don't get into the trash? 'Cause I can start knocking the can over and spreading stuff all around. I really could. I'll not do it for crunchy treats.

Okay. So the people have some pressing need to invoke the M-word again, mostly because they are mean and horrible people bent on making my life miserable. Well, that and the lady that owns the house we're in is trying to sell it and the M-word would take effect anyway, but still. I think they're enjoying my misery a little too much.

So they say they found the perfect house, and offered the people who own it ALL OF MY MONEY. And today the other people said YES! WE LOVE PSYCHOKITTY MONIES! But then the Man and the Woman said because this is a short sale, it might take a long time.

I'm pretty sure that makes it a LONG SALE and that somewhere along the way both my people sneezed and LOST THEIR BRAINS.

Hmmm...my people are just not especially bright OR prepared. Today they went house hunting, and they didn't even take any weapons. It's not like they have sharp teeth or claws to take one down on their own; they need something. And since they didn't bring anything home, I know they weren't very successful.

Apparently I don't have enough money left since they're hunting and not just buying one.

Oh and the Woman said one of the potential houses already has kitties. As if that means they won't need me and Buddah anymore! I got news for them, if they manage to get a clear shot at a house, they better make enough noise to scare those kitties away, because they are STUCK with me.
Posted by Max at 10/21/2008 09:44:00 PM No comments:

Every morning after the Woman gets up, she goes into the giant litterbox room, sticks her head under the tub faucet, and tries to rid herself of some pretty nasty head funk. It doesn't really work, so this morning I decided to be really nice and do something about that. I jumped up on the bed before she was awake, and licked her hair all over, so that it was perfectly groomed and coifed just so.

Then she gets up and goes into the giant litterbox room and looks in the mirror and says "Holy crap! My hair is sticking up like those guys from Flock of Seagulls!" Or something like that. It was most definitely unfavorable. And then she ran her fingers through it and looked at me and said "It's wet. This is cat spit isn't it?"

She didn't sound as happy as she should have. I told her she looked pretty amazing, way better than she normally does, but she just sucked in a deep breath and let it out in that obnoxious way that people do.

And then. Then! She kneeled on the floor and stuck her head under that water and tried to undo all my efforts! So I jumped on her back and tried to at least do something with that stupid neck hair of hers, and she said "Yeah, you're a big help aren't you?" Well FINALLY! At least she admits it.

I'm still not happy she undid all my hard grooming work.

Apparently, once the M-Word has been implemented, I'll never have to do it again. I think I can get behind that. But ya know, while they hunt for new digs, they're going to leave me at home and I won't get a say in what they buy. And people just don't have good taste. They'll probably get something that doesn't have good outside viewing windows or places to jump, and I know there won't be any stairs.

I wonder how long it will be...Hmm.

Oh! Dangit! I bet they use MY MONEY!

Unless they've already spent it all.

I bet they did.

The People are mentioning the M-Word again! As in "well, maybe we'll be doing it before the end of the year." I must poop upon someone's pillow and treat EVERYTHING THEY OWN to a toothy death!

Post # 1000 is brought to you by the evilness and wretchedness of THE FREAKING M-WORD! Hey, remember this kitty? She's the one who tried to take up residence in the rumbly bike room last December. The people looked and looked for her family but never found them, and then realized she didn't HAVE any people, so they found a family for her.

(The Woman still wishes she had kept her. But...)

The Man got to talk to the lady that arranged for her neighbors to be the kitty's family. Her name is Snowball (again...it was Angel for a little bit) and they let her have one litter of kittens before they got her lady gardenectomy, and they kept two of them and then found happy Forever Homes for the rest. So now she has a boy kitty who is probably NOT like her brother, and she's a Mom! And she gets to stay their Mom. But I bet they don't listen to her much anymore, because I know what teenagers are like and that's when they stop listening.

But, the main thing is she's happy and healthy and her Forever Home turned out to be a really good one.

The big floppy comfy chair is MINE, and the little black monster DEFILED it. And then...then! When I was ready to grace the Woman's lap for a nice long nap, he was there! THAT LAP IS MINE!

Oh great. I finally get an evening where I can sit and visit every blog on my blogroll, and it's BROKEN. It's been broken almost ALL DAY. How can I visit everyone if I don't have their links? Worse, how an anyone visit ME???? I WANT MY VISITORS, DAMMIT!

Because you know that's what you are...and you want this on a shirt, you know you do... 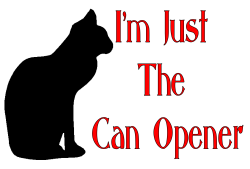 The Woman added a couple of designs to the store. Click on the images. Go peek. You will likey.

Oh man, Buddah is mad. The Man picked up his grass and took it outside and never brought it back. At first we thought maybe he was giving it sunshine because you know, grass needs sun. But then he never brought it back. And the Buddah wanted to munch on it and it wasn't there, so he asked the Woman and she said "Sorry, Little Man, we threw it away. It had bugs in it."

Bugs = extra protein! Buddah LIKES to eat bugs. Now I'm just as happy that the bug laden thing is gone because I don't like to eat them, but I wasn't eating the grass anyway.

A quicky post to answer Kimo & Sabi's question in the comment of the last post...I got the signature thingy from My Live Signature. You can create all kinds of different ones there. I found it because Crew's Views posted about it a couple days ago and thought "Sweet!"

I think it will amuse me for a few days...then we'll see if I remember to use it after that.

Ok, so the Woman gets all bent when I wake her up in the morning, but when I let her sleep I get "Max! It's late! Why didn't you wake me up???"

On the plus side, she did come downstairs to feed us before she stuck her head under water to get rid of her hair funk. Ya know, she tries to rid herself of that every freaking day, and apparently she's not having any success. You'd think by now she'd give up and learn from the kitties: if you want less hairy head funk, lick yourself clean.

Ok. Y'all need to explain Catster to me. I mean, I have an account there but I don't know what to do with it. But, now that Skeezix is GONNA BE BLOGGING THERE!!!! I'd kinda like to figure the whole thing out.