This is a major relief: Denny sent home some chicken! I was worried that I might have offended him and that he might not want to ever send me any again, but he already did! I wish the people would invite him over for once so I could meet him, but they're antisocial like that. Or maybe people just don't like them, and Denny is just being nice to them. You know, like that one kid your Mom makes you invite over but you don't really want to? That's my People...

And I have to live with them.

What? I was here first, you go sit on the other side of the table. Dooods...I have come to a realization. And it started the other day, when the Younger Human was here. He helped the People move some stuff around, and then they went out, and when they came back, there was STEAK.

Then he was back today, and there was TURKEY. Not just a tiny bit, but almost a meals worth. And I didn't have to beg, I just sat there at the table and stared at him, and pretty soon I had turkey!

So clearly...the Younger Human is a FOOD GAWD.

Oh sure, the People might have put it on my plate but I wouldn't have gotten it if not for the Younger Human. And he's better than Denny, because Denny only sends home chicken for me, which is good and all, but I got STEAK with the Younger Human, and then TURKEY, which, like, never happens!

This is how I felt after: Sleepy and warm and full.

(Oh, and Denny, I still really really really like you and I appreciate that you send home chicken for me. I hope I didn't offend you.) I wanted my freaking bed! I couldn't even jump on him and put the bite on him because the Woman was right there and for whatever People reason her tiny little brain coughs up, she gets upset when I do that. I didn't get to nap in my own bed AT ALL yesterday!

On the plus side, tonight the Younger Human was here, and before he went home he smelled like real live fresh dead cow, but even better, he pulled some out of a box and gave it to the Woman to cut up for us, so I got steak. STEAK! I'm pretty sure he took some home with him to give to that woofy, Butters, but that's all right. He gave the best piece to me.

Oh! And Marty? It looks like they met their goal for his surgery. If you're so inclined to still donate, I'd bet they could use a few extra what-if bucks, but if not--they got what they set out to get! Aside from a sore spot 13, I think Marty's gonna have a nice Christmas. Or Hanukkah. I'm not sure what he celebrates. 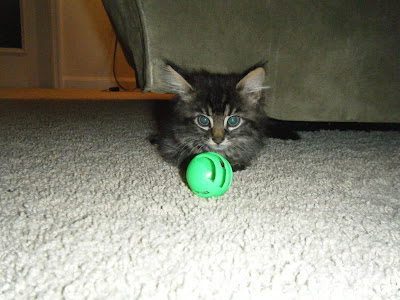 His name is Marty, and he needs help.

Marty is just a little guy who was rescued by a couple of college students. They were visiting someone who had him, and while they were there his anus (spot #13) prolapsed...and Marty's people apparently didn't want to do anything about it. So the college students took him and spent their on money trying to get him all fixed up...but he needs more surgery, and it's gonna be kinda spendy.

There's an article about it at http://theminaretonline.com/?p=7812 and to find out how to help go to http://handipets.com/blog/?p=782.

They're getting close to raising the amount they were told it's gonna cost, but you guys know how stabby visits go...there's always something extra that pops up.

If you can help, even a tiny bit... look at that little face. And think how awful it would be if your spot 13 suddenly prolapsed.

I know times are tough and if you can't, that's cool. But think good thoughts and stuff for him. Ok, dooods, I know you've seen this picture before, but it bears repeating because I need your help.

You see that red thingy between my paws?

That's a red felt catnip candy bar. Someone barfed all over it the other day, and shortly after that it mysteriously went missing. It's one of the few things I will engage with (no, dammit, I do not PLAY!) but it's just...gone.

I made this clear to the Woman, and she went out today and looked everywhere that sells kitty toys. She even went into grocery stores. And then she got online. But she can't find them anywhere. She used to find them all over the freaking place, but when I need one? Gone.

Some of you have much better brains than she has, and can find things online that she can't. So if you could, the smart ones, Google or Yahoo or whatever and find a place online that sells them, I would be very grateful. This was a horrible, horrible weekend. First, the Woman got up really really early, like Oh Holy Hell early (cause that's what she looked like) and she left the house! Without feeding us! I mean, we were really good and waited patiently while she took her drugs and got dressed, and when she was leaning over the bathtub to wash her hairs, I sat on her back and helped. I was nice.

But then she grabbed a bunch of stuff, like a box she put food FOR HERSELF in, and a jacket, and the giant hard hat she wears when she's on her rumbly bike, and she left. Just like that. I sat by the door and looked out the window there and kept saying "Come back! Come back! You forgot something!" but she didn't come back. HOURS later, or maybe about five minutes, the Man came back from passing gas but did he feed us? Not for like TWENTY minutes! And then he had the nerve to point out we were getting to eat early because he had to go to bed.

And yesterday, it happened all over again. She went off really early and he came home and didn't feed us for HOURS, or at least thirty minutes while he took a bath, and then we were alone all day long. Right about the time the Man got his lazy ass out of bed-when the talking head on TV came on to tell us what stupid crap happened during the day--the Woman came home and said she passed her skills test.

So I listened. You know what she was doing all weekend while I was without head skritches and warm? Do you?

She was taking a class on how to ride a rumbly bike!

Dooods...she's been riding rumbly bikes for almost FOUR freaking years! AND she took the class four years ago! I got ignored for two whole freaking days so she could so something she already did before!

Oh, she says it was a lot of fun and the other ladies taking the class were lots of fun, too, and the rider coach was all kinds of awesome, but that doesn't change the fact that my life was INCONVENIENCED so she could learn to do something she already knows how to do! So you know what I did?

This morning, really, really early, while she was asleep and the Man was still out passing gas, I horked up a nice wet hairball.

On the brand new rug.

That'll teach them to ruin my weekend.

Yeah, I know, Buddah posted this picture, too. But I wanted you all to see it--look what I have to put up with! That's my comfy chair, and my space to nap. It doesn't matter that he was up there first today. It's mine! He didn't even ask permission to get up there. I walked into the living room and there he was, snoozing in my space. He has no respect for personal property, none at all. This is the real fireplace; it has real flames, and a blower built in that spits our warm air, kind of like the warm air blowing thingies that are in the ceiling. This is TONS better than that fake fire thingy. It gets a lot hotter and makes the whole room nice and toasty...and as you can see, the Woman put my Gizzy quilt on my bed and set it right here the warm airs hits, so I'm all set for winter now.

Oh, and I am not playing here. I am self-medicating.

And ignore those clothes holder thingies...the Younger Human has some laundry to pick up, but until he comes to get it, Buddah and I are lounging on it so that he takes home a lot of Max and Buddah fur for Butters the Dog to smell.

I do enjoy that spiffy rug I'm lounging on while I nip out. The people put it down the other day and it stinks a little, but it's a lot nicer to roll around on than the floor. It's nice when they finally do something right.

The other day I was a little bored, what with having the lame people that I have...they weren't doing anything interesting and they weren't paying attention to me, and I had already taken my 3rd nap of the day.

I needed something to do.

The Woman has her butt plastered to the new sofa that's supposed to be my new bed, and she was reading something on that reading thingy she has that shows books but doesn't look like a book...so I plopped down on her lap and started reading with her.

Doods! She was reading about this really cool cat named Homer. Homer looks like Buddah but he's way more awesome (ok, to me...the Woman disputes this, but what does she know? She's thinking with that puny human brain...) I mean, Buddah can see and he doesn't do half the stuff Homer can do. Homer doesn't even have eyes, and he can jump straight up and catch a fly in the air! I won't do that because I don't want to have to eat flies, but Buddah can't.

Homer is just 23 kinds of awesome, and if you haven't read his book yet, you have to.

Oh, I should point out that Homer had his person write the actual book, but I think he did that because 1) he can't see the computer keys to type, and 2) it was probably good for her. You know, people need to stop and think about how important we are, and I think Homer's person totally gets it.