I was cheated on.

The Woman was gone for-freaking-ever, and when she came home, she smelled like that Damned Dog Butters and his sister, Lady. I was inconvenienced all the way around. The Man shuffled food times around and no one was here to open the 10 o'clock can, which means I had to wait until 7:30 every morning for gooshy foods. There was no one here to sing to at 4 am. And when the Man was home during the day, he was asleep.

My needs were not being tended to.

She didn't even leave me the laptop, so my Mousebreath column was late. All so she could go off and play with those dogs. 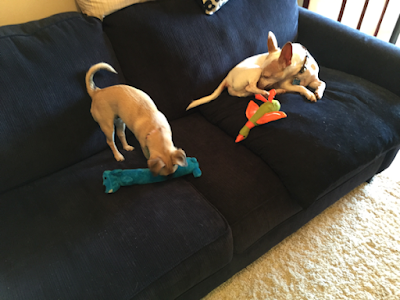 She even gave them toys! *I* didn't get any new toys.

She came home yesterday afternoon and expected me to be all oooh I missed you and I knew she expected that, so when she sat down, I jumped onto her lap.

And then I bit her.

You heard me. I bit her. Right on the chin. Oh, I didn't draw blood or anything and I didn't even bite hard, but I let her know what I thought about the whole thing.

I mean, really. What's more important? Me or those DOGS?

Yeah, there's always a But Then.

But then I found out why she went to stay with Butters and Lady. And I think if she had told be ahead of time I would have not been upset by the betrayal and the stink of dog upon her. In fact, I probably would have sent toys for them myself. But she didn't tell me, and she took the laptop with her to keep me from accidentally saying something online, and that would have ruined everything.

So you know I have a Younger Human. He doesn't live here, he lives with those damned dogs. Recently, he moved into a new place, so that he could also live with -- get this -- a girl.

For reals, doods! A GIRL.

Now, I have not met met this girl, but I have been assured by the People that she is lovely and they really, really like her, and since the Younger Human has (aside from those dogs) pretty freaking good taste, and they say she makes him ridiculously happy, I like her without having to meet her.

Well, apparently he likes her more than anyone. So many, many months ago, he started planning. It was a big plan, and it required the Woman to go stay with the dogs so that he could take this girl to the House of Mouse.

That must be a fun place, because they go a lot, and my people go a lot. But, I digress.

The Younger Human had been planning and he needed to have her at Disneyland. It was Dapper Day, which evidently means "dress super nice to ride all the rides" and they were both all shiny and spiffy. He wanted to take her on this ride called Storybook Canal at night time and was super surprised to find out it stopped running at not-quite-night time, but he got a friend to tell Mickey Mouse that it was important, and they do what the Mouse tell them to down there and he said to turn the ride back on at night, so they fired the ride up just for them.

And then the Younger Human and his girl and some friends got on the ride, and halfway through he asked the boat driver dood to stop.

AND HE DID. He stopped the boat right then and there.

My Younger Human got as far down on one knee as he could ('cause...tiny boat) and he asked her to marry him. 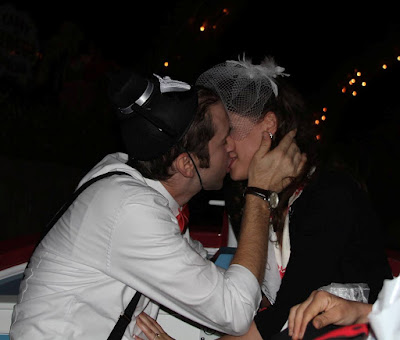 She totally has good taste, too.

So. Ok. I can be fine with the Woman going to stay with the dogs, because they can't exactly feed themselves and someone has to let them out into the yard a few times a day. I wasn't happy all weekend because I didn't know, but I understand why now. I don't think anything could have kept the Woman from going to puppy sit.

I mean, I hate that she smelled so much like dog, but hey, I did get to bite her, and the Younger Human is wicked happy, and I think his Seriously Awesome Wife2Be is, too.

Hm. I may have to work on that one.

But she is awesome, I can tell from the pictures. She makes my Younger Human happy, that's how I know.