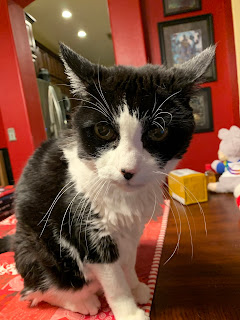 A long time ago, I set things up so that everything I posted to Facebook propagated to Twitter, which then filtered to the sidebar there on the right. It seemed like a reasonable thing to do, because it seems like everyone has jumped to Facebook yet I still wanted to keep this blog with something more than the too-infrequent postings I've done.

Sometime in January, it stopped working. Mine doesn't work; the Woman's doesn't work. She tried unlinking and then re-linking, but things still aren't making it from FB to Twitter.

So now I dunno.

I may start crossposting, same things here and on FB, so those who still pop over and read blogs but also follow my FB page will see duplicates.

When I have more blog worthy things, I'll still post those to here first.

Mostly, I'm just annoyed that the linking broke. I haven't tried posting directly to Twitter to see if it shows up here, mostly because if I'm going to post twice I'd prefer here, and also because I just don't get Twitter. I've had an account forever, but I just don't get it. And things I don't even follow show up in my feed, more than things I do, and it's like...why? Just show me the people I follow, how hard is that?

FB is just as bad on that.

Max, we get it!
FB has put my blog FB page in jail, and I don't know why.
When I post on Blogger, I send it to FB and to Twitter, but now FB won't take them.
Ah, the beauty of technology; guess we'll just have to lump it, 'cause we cannot like it.
And, if I may say so, you are a handsome grumpy mancat!

Max, some of us don’t subscribe to social media but check your blog daily. We hope you still keep the blog going.

Of course you are allowed to be grumpy, Max. I have never had a Twitter account and I rarely look at FB now. I would unsubscribe from FB, but hubby is always using my account to see what is going on.

We don't use FB or Twitter, so we have no idea either. We just know we don't like FB, never have, never will.

And even on blogs, we notice that more and more are on non-blogger sites and make us enter our name, address, and email everytime (that used to be autofilled or at least auto-fillable with a letter or 2). It is getting harder to comment sometimes.

We think some sites ar trying to force us to do things THEIR way or not at all, and WE are not thrilled.

we R knot on facebook, insta gram, twitter... sew we iz knot sure how ore why all that tech stuffz werk....

took uz a month a SUN dayz ta figure out blogger when
we left catster !!! :)